OAKLAND, Fla. (WFOR) – A woman working at a Florida animal shelter was killed when police say a dog “suddenly snapped.” Another worker tried to help her but was injured.

Pam Robb was killed in a dog attack Thursday morning at 100 Plus Abandoned Dogs of the Everglades, an animal rescue in Oakland Park, Florida. Her wife, Angie Anobile, says Robb died doing what she loved: caring for animals.

“She wasn’t just doing. She was being. She was being Pam Robb, a wonderful, wonderful, giving, caring person,” Anobile said. “She just had a love for those animals. She really did, and they responded very well to her. This was just a fluke accident.”

Police say the attack happened when Gladys, a recently rescued, large, mixed breed dog, “suddenly snapped,” injuring Robb and another worker who tried to help her. Robb died of her injuries at the hospital. The other woman suffered only minor injuries.

Anobile says Robb, her partner of over two decades, was always there to officer, balance, peace and hope to whoever needed it. She wants that to be passed on.

“I just can’t believe it,” Anobile said. “I want to honor my partner, my beloved friend and the mission that she had in life.”

The dog was taken to Broward Animal Care, where it was euthanized. A sample has been sent off to see if it had rabies.

Sun Feb 20 , 2022
A Feline Nutritional Supplement Crafted to Support Whole Body Feline Health LOS ANGELES, Feb. 19, 2022 /PRNewswire/ — February 20th is Love Your Pet Day, and there is no better way to celebrate than for pet owners to tend to the health and diet of their felines. Ultimate Pet NutritionTM […] 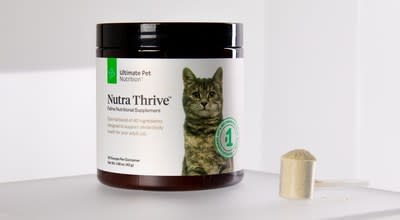