Last week, the Louisiana SPCA was so overrun with new arrivals that the hallway outside its adoption center in Algiers was lined with dogs in kennels.

The SPCA is hardly alone.

Across Louisiana, animal shelters have been hit hard in recent months as an influx of pet surrenders, many spurred by the rising costs of keeping pets, has pushed them to beyond their capacity. Many have stopped accepting new animals.

“We’ve always had a problem in Louisiana because of a lack of resources for shelters and pet owners. People are abandoning animals at record numbers. I’m hearing it all day long,” said Jeff Dorson, director of the Humane Society of Louisiana.

Dorson said that inflation has played a huge role and many pet owners can no longer can afford adequate veterinary care, pet food or supplies.

While some people may be able to absorb the increased costs associated with caring for a pet, it can be very difficult for others.

As Sena Michelle of Baton Rouge looked for a new place to live, affordable, pet-friendly rentals were few and far between. Fearing she wouldn’t find a landlord who would allow it, she thought she might have to place her pitbull, Rocky, up for adoption.

In the end, she was able to convince her new landlord that her dog wasn’t aggressive with other animals or children and wouldn’t damage the property. But keeping Rocky will cost her more.

“We had to pay a deposit and higher rent each month,” said Michelle. “I think it’s worth spending the extra money to be able to keep him with us.”

“I am a very big advocate of adopting pets because I know the shelters are so full,” she added. “Not just in Louisiana, I feel like it’s everywhere. And more likely than not, the breed you always see is pitbulls.”

The biggest stories in business, delivered to you every day. Sign up today.

The packed Louisiana shelters are part of a nationwide trend, Dorson said.

Shelters across the U.S. are hanging out the no-vacancy sign as the surrendered animals eat up all available space. The limited space, meanwhile, has made it difficult for shelters to transfer animals to less-crowded places – a common practice when shelters become too full.

For instance, Dorson said the Humane Society typically ships 30-50 animals to shelters in eastern and western states every couple weeks. But those shelters are now also full.

The skyrocketing cost of gasoline has also been a hurdle, he said.

In St. Tammany Parish, the Department of Animal Services said in a social media post that it has been “forced to take in more than 1,100 abandoned animals during the past 90 days,” and can’t fit any new animals.

“We are definitely concerned with the amount of animals being surrendered while adoptions are slowing, and our receiving shelter partners in other states are seeing the same issues,” St Tammany Parish Director of Animal Services Robert Bremer said.

Hoping to spur more pet adoptions to ease some of the crowding, St. Tammany is waiving adoption fees through June 16 and offering a “sleepover” program where families can take a pet home for the night to see if they are a good fit.

“We need the community’s help in the short term to help keep animals out of the shelter and on couches,” said Bremer.

The SPCA, meanwhile, is trying to help pet owners with some of the challenges they face, hoping it will slow the tide of surrenders. “We have a food pantry onsite and can assist with some of the medical costs,” Winstead said.

Animal shelter representatives for Jefferson Parish and St. Charles Parish were not immediately available for comment on Monday.

Wed Jun 8 , 2022
ALBANY — When Chelsea Blackwell lost her dog of 15 years Monday, she was devastated. She wasn’t sure she’d find him again — and she certainly didn’t think the person who would find her pet would be famous actress Hilary Swank, who is in Albany shooting a movie. Blackwell started […] 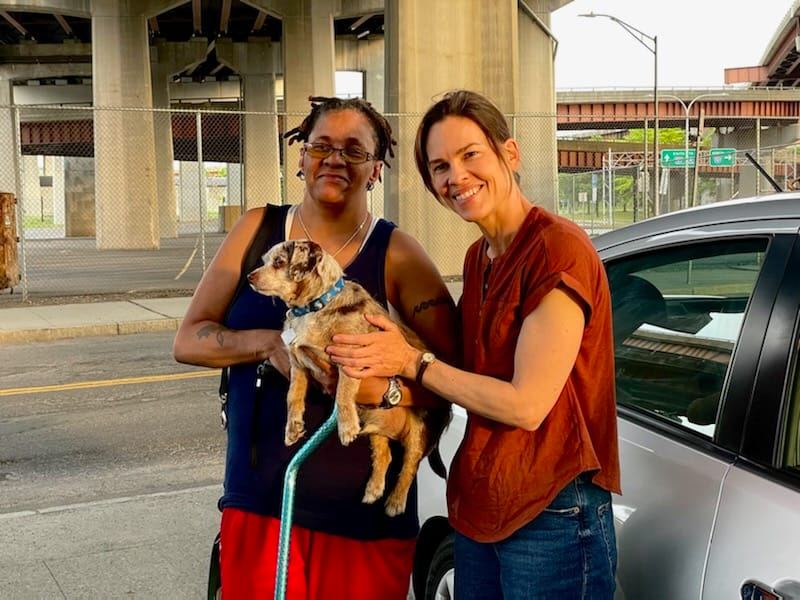