Dallas – Nic Carmona and Melissa Rodriguez’s pet dog Luna is like a daughter to the young married couple.

They took her into their Dallas home last December, when she was a four-month-old puppy. She’s a Texas Heeler — a cross between an Australian Shepherd and Australian Cattle Dog — a smart, curious dog with lots of energy.

In the first several months, Luna never left the side of the couple. “We always had our eye on her,” Carmona said, “and she had her eyes on us every moment of the day.”

Now, like much of the U.S. workforce, Carmona and Rodriguez are returning to the office. Rodriguez, 32, an architect, works at her firm three days a week, while Carmona, 30, a health care administrator, is in the office as many as five.

Instead of spending all day with her owners, Luna now spends eight to 12 hours of the day at home by herself. Her owners worry she’s showing signs of separation anxiety.

Common symptoms of this anxiety include destroying household items, being excessively vocal and defecating and urinating around the home. Excessive salivation, loss of appetite and harming themselves are other possible signs.

Pets’ separation anxiety was not born out of the pandemic. Studies from the past two decades have found that between 17% and 19% of dogs who seek veterinary and behavioral care in the U.S. show signs of separation anxiety.

What is unique about today is the volume of pets undergoing the same dramatic separation all at once, given the number of Americans who worked at home over the past year.

For many pets like Luna that were adopted during the pandemic, being at home with their owners all day is all they’ve ever known. This transition could be even more jarring.

Veterinarians and dog trainers are seeing an uptick in concerns as people begin this transition. Their biggest piece of advice? Start by thinking of our pets like humans.

Why do pets react to transitions like these in the first place?

“Animals truly are creatures of habit,” said Dr. Erin Tate, a Dallas veterinarian at CityVet. “They like to have a normal routine.”

When that routine is disrupted, the pets experience stress, which can sometimes build up to severe levels of anxiety.

Although the precise cause of separation anxiety in animals remains unknown, some animals are anxious by nature, according to Valarie Tynes, a veterinary behaviorist in Sweetwater, Texas. Dogs are more often predisposed toward being anxious than other common household pets.

At the same time, pets are individuals, just like people. Some cats may show signs of separation anxiety, while some dogs may be unfazed by their owners leaving.

One factor that may increase dogs’ risk is age. Puppies and geriatric dogs struggle more to adapt, Tynes said.

Carmona and Rodriguez noticed Luna’s anxiety before they had even returned to the office. She got in the habit of toppling a gate they installed in their living room to protect furniture, en route to the front door when the couple would leave to run errands.

Since they’ve returned to the office, she’s begun to urinate around the house, despite being house-trained.

They’ve also observed a change in her eating habits. Before, she would run to her food dish at breakfast and dinner. Now “she’s more mopey,” and her appetite seems to have “decreased significantly,” Carmona said.

They are planning to consult with their vet on Luna’s behavior. In the meantime, they’re also finding ways to cope with their own concerns about leaving Luna. Rodriguez said the anxiety “goes both ways.”

“This is my first time being a pet parent,” she said. “I think I have more anxiety than her [or] maybe equal.”

“What’s helped us,” Carmona said, “is that when we have the time to be with Luna now — [although] maybe it’s not as much as it used to be — we give her all the love and attention that we possibly can.”

What to do if your pet’s experiencing separation anxiety:

The last thing you should do is punish your pet. “It’s just like humans,” said Robin Ashman-Terrell, a certified professional dog trainer. “If somebody is really anxious about something, their adrenaline goes up [and] it’s really hard to think logically.” The same is true for dogs, and reacting angrily to a dog’s behavior doesn’t help them change their behavior.

Instead, try strategically rewarding your animal. Dogs in particular learn by association.

Tate suggests giving your dog a treat when they remain calm. She cautions against offering these treats as comforts when you’re leaving home, however. Dogs may mistakenly associate these with the undesired, anxious behaviors.

Dr. Lori Teller, a clinical associate professor at the Texas A&M College of Veterinary Medicine & Biomedical Sciences, recommends pet owners start preparing their pets for the transition weeks before they return to the office.

Leaving your dog alone for shorter periods can help wean them onto the separation. Also, finding toys your pet enjoys can help keep them occupied while you’re away, Teller said.

“My biggest concern as a veterinary behaviorist is that the patients I see oftentimes for separation anxiety have been suffering for years,” Tynes said.

Her advice is to consult professionals earlier on, rather than letting the anxiety escalate to the most severe symptoms. Tate recommends installing a webcam to watch out for warning signs while you’re away from the house.

– Talk to your vet

In some, often more severe cases, pets require more than behavioral modification to overcome separation anxiety. There are pheromone-infused sprays and prescription anti-anxiety medications available for these pets. Veterinarians can help pet owners find the routine that works best for their pets.

There may also be cases in which symptoms are related to another underlying medical condition. The best approach is to work closely with a professional.

Sun Jul 18 , 2021
A woman previously filmed luring an unleashed dog onto a highway in New York City is now being accused of targeting another Asian dog owner. What happened: In a viral TikTok video, a white woman — whose identity remains unknown — is seen yelling at another woman behind the camera […] 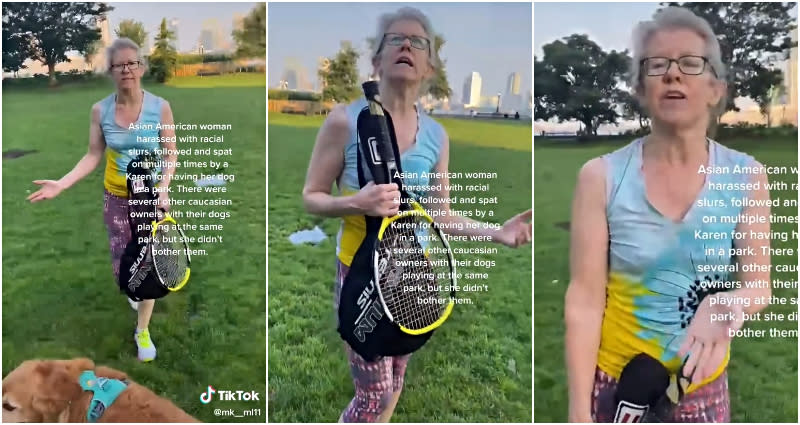