Employees at Indianapolis Animal Care Services are used to advocating for their pets.

They share photos of pit bull terriers and Labrador retrievers and domestic long-hair cats, along with snippets about their furry friends — all in first-person, from the animal’s point of view.

“My name is Sylvester. Unlike my name, I am not a naughty kitty! I am 2 years old, I seem to impress everyone.”

“Hiya! My name is George and I am just the cutest guy!”

“If you are looking for a sweet pea who will be sure to brighten your days, consider coming to meet me.”

Those messages go out to the community with genuine hope that one day those animals will find their forever homes.

But until then, an exhausted, overworked staff, strained by the pandemic fights to keep the shelter running — and these days, they’re asking for help, both for the animals and for themselves.

“The staff is stressed out. The volunteers are, too. We don’t get to really spend as much time with the animals as we used to,” Lauren May, a senior animal care technician said. “So it’s kind of taking its toll on everybody.”

The shelter is currently at capacity, with about 400 animals in the building and 230 more being fostered or treated before they can be adopted. IACS has seen these numbers in the past — they’ve reached capacity a few times this year — but with a smaller staff, this influx feels especially demanding.

They have about 20% fewer employees than usual, according to Roxie Randall, IACS’ manager of community outreach, so people are working overtime and often taking on extra responsibilities in their jobs.

The flow of animals coming in doesn’t seem to be slowing down either, with new intake appointments consistently booked. And unlike privately run shelters, IACS cannot turn away animals from Marion County residents, even when the shelter is at capacity.

“It doesn’t take long being here at the shelter to realize that IACS needs help,” Ashley Temple said. “We’re constantly trying to stay afloat with an absolutely never-ending line of animals coming in our door.”

In 2018, she started the IndyCARES program, which works in partnership with the shelter to help people keep their pets instead of surrendering them. If someone isn’t able to keep up with a pet’s medical care, for instance, IndyCARES may provide free or discounted veterinary care. Or if a dog is potentially being given up due to behavior, the program might offer free behavioral consultations. 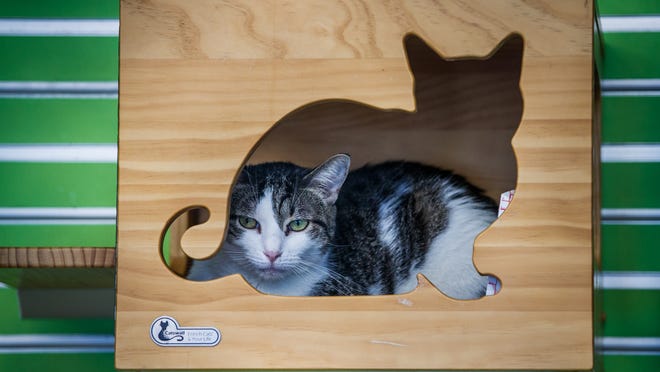 “As often as we can, we try to at least let them know that there is a program out there that can offer support if it’s something that they’re interested in,” Temple explained.

With that proactive approach, they’ve helped more than 1,000 pets stay with their families so far this year.

Still, the pandemic has exacerbated problems where there are no easy interventions. IACS hears stories about people losing their jobs and getting evicted from their homes regularly, leading families to make difficult decisions about the pets they love.

“It’s just kind of heartbreaking all around,” Dayna Warren, a veterinary assistant, said. “Someone lost their job because they couldn’t work because of COVID. And then they can’t pay their rent. And then they get evicted. And then, where does the animal go?

Photos:Dogs sit on Santa’s lap during Paws and Claus at Garfield Park

That stress and frustration has also led to heated exchanges at the shelter, Warren and Temple shared.

When people cannot walk in and immediately give up their pet, for instance, they sometimes get impatient and angry — screaming, yelling and even threatening the IACS employees.

“Unfortunately, we see the side of people too who … feel differently about owning animals than I do or the people here at the building,” Temple said. “They see them as very expendable. They get very frustrated when we tell them how full we are.”

And when she’s explained why they have the appointment system in place — to help limit the numbers of animals so they don’t have to consider difficult decisions like euthanasia — she says, they simply tell her, they don’t care.

“They don’t care that their pet may not survive,” Temple said. “They just want to get rid of it. And so those kinds of conversations really wear on you as a person hearing it literally every single day.”

‘Best part of their day’

Those tough conversations are compounded by the shelter’s long list of needs.

IACS needs more money and more staff, Temple says.They need more people in the community to adopt and foster. They need a better building and more donations. Though the shelter is primarily funded through the city’s Department of Business and Neighborhood Services, it also relies on donations from the nonprofit “Friends of Indianapolis Animal Care Services Foundation.”

Amid all those monumental challenges though, there are small signs of hope.

Mom and daughter duo Wendy Spencer and Rachel Eisel began volunteering together in July. On Monday, they were caring for a spayed, black and white domestic cat at IACS.

On Dec. 20, hours after a cat named Sylvester was promoted on the IACS Facebook, he got a new pet parent.

“That’s my baby! Just adopted him today!” she shared online.

May remembers a dog named Funnel Cake, who had been in and out of the shelter multiple times due to returns, finally getting adopted again.

“It is a lot harder working when we’re this full because, you know, you’re coming into a stressful situation even before you get in the door,” May said. “But you kind of know that you’re the best part of the animal’s day so it keeps you coming back day in and day out.

“They might not have the best situation here, but you are the best part of their day.”

The Science Behind Supplements | Current Issue

Sat Dec 25 , 2021
Jess Wealleans Supplements for pets have become as common as humans taking their daily multivitamins. Dogs and cats alike can greatly benefit from a supplement that can do anything from easing their stress, improving skin and coat health, treating existing conditions and helping to prevent future health issues.  As the […]