Brittany Davis longed for a big dog, and she had her heart set on one of the largest and lankiest of all: a Great Dane.

She got her wish in February 2020, though it was not how she thought it would happen. Her brother, Garrett Davis, knocked on her door and handed her a 3-month-old, gray-and-white American Great Dane with floppy jowls and soft fur.

Her brother got him from a friend whose dog had recently had a litter of five. The pup weighed about 25 pounds, and Davis’s eyes immediately focused on his enormous paws.

“To say I was surprised is an understatement,” said Davis, 36, who lives in Bedford, Tex., near Fort Worth. She named the puppy Zeus, after the Greek God of sky and thunder, and because she thought the name had a nice ring.

“He was the biggest puppy in the litter — a sloppy, sweet, uncoordinated and lovable dog, just like I’d always wanted,” Davis said.

It didn’t occur to her that he would grow to become the size of a person.

Guinness World Records has declared 2½-year-old Zeus the tallest dog in the world at 3 feet, 5.18 inches. On his hind legs, he stands more than 7 feet tall, said Davis. He weighs about 200 pounds.

Her father, Donnie Davis, was also smitten with oversized Zeus. He submitted paperwork in early January to apply for the record, which was previously held by Freddy, a Great Dane from the United Kingdom that stood 3 feet, 4 inches tall. Freddy died at age 8 in January 2021.

“My dad called me at school to tell me Zeus had been confirmed as the tallest,” said Davis, a first-grade teacher.

She thought perhaps he had a chance at the title because people stop her all the time and tell her they’ve never seen a dog as big as her Zeus.

“But to have it made official was pretty overwhelming,” she said. “To me, he’s just a giant, gentle dog who thinks he’s a puppy and likes to sit on people’s laps.”

The idea to apply for the Guinness record came about when one of Davis’s cousins mentioned that Zeus was taller than Freddy. He was also approaching the height of the tallest dog ever recorded by Guinness — a Great Dane from Michigan that was 3 feet, 8 inches tall and was also named Zeus. He died at age 5 in 2014.

“That kicked the whole thing off,” she said. “We had his height verified by a vet with three people present, and he was measured with a stick called a wicket that also measures horses. He hated it.”

Millions of bees were dying on a tarmac. Local beekeepers ran to help.

Davis said she knew early on that Zeus was going to be a supersized dog because of his huge paws. He also had an enormous appetite.

“He’s always loved to eat, and now he’s up to 10 to 12 cups of dry food twice a day,” she said, adding that Zeus also loves to chomp on carrots, fried eggs, deer antlers and ice cubes.

“He especially loves to steal my son’s breakfast when he leaves it out,” said Davis, who has two boys, Jamison, 15, and Kingston, 7 months.

It’s hard for Zeus to resist, especially when the food is at eye level.

“Just the other day, he stole three sausages off Jamison’s plate,” she said. “He doesn’t have to go to a lot of effort — because he’s so tall, he just walks over to the counter and takes what he wants.”

Zeus sometimes drinks water from the sink while flat-footed, and he regularly steals Kingston’s pacifiers from the kitchen counter, she said.

“He loves to hang out with the kids and he sleeps on Jamison’s queen-size bed every night,” Davis said.

Jamison takes Zeus for daily walks, she said, but he gets most of his exercise by romping around the house.

“We call it the ‘zoomies’ — he’ll race around for five minutes, then plop onto a chair when he’s tired,” she said.

“They all get along great, but Ellie doesn’t appreciate it when Zeus steps on her,” said Davis. “Zeb likes to wrestle with Zeus and is probably his best friend.”

“When it comes to the cat, they have a mutual agreement to avoid each other,” she added.

Zeus isn’t afraid of much, she said, but he does have a fear of thunderstorms and wind, a funny thing for a dog named after the god that could throw lightning bolts, according to Greek mythology.

“He’s afraid of rain and sprinklers, and he won’t even stick his head out of the car window,” she said. “He really enjoys boat rides, though.”

Great Danes were originally bred in Germany as boar-hunting dogs, according to the American Kennel Club, and they have shorter life spans of seven to 10 years because of their large size.

Zeus has regular vet checkups and is in excellent health, said Davis, noting that his parents are both about 8 years old and still healthy.

“We hear all the time that he’s the size of a horse and people wonder if he has a saddle and if they can ride him,” she added. “The answer is: ‘No.’ He’s a dog, so he really wouldn’t like that.”

Zeus does enjoy visiting the Dallas Farmers Market, where most of the locals know him, she said. He also has his own Instagram page.

“He loves all of the attention and treats that he gets, and wherever he goes, he brings people a lot of joy,” said Davis. “Whenever we go out, he’s a big hit. He’s the best dog ever and we’re happy to share him.”

Cats who live together know each other by name, Japanese study finds

Sun May 15 , 2022
Cats who live together with their other feline companions identify and learn each other’s names, a new study in Japan has shown. This discovery, made by scientists in Kyoto University and other institutions, was after studying 48 cats which cohabitated with at least two other pets — either with a […] 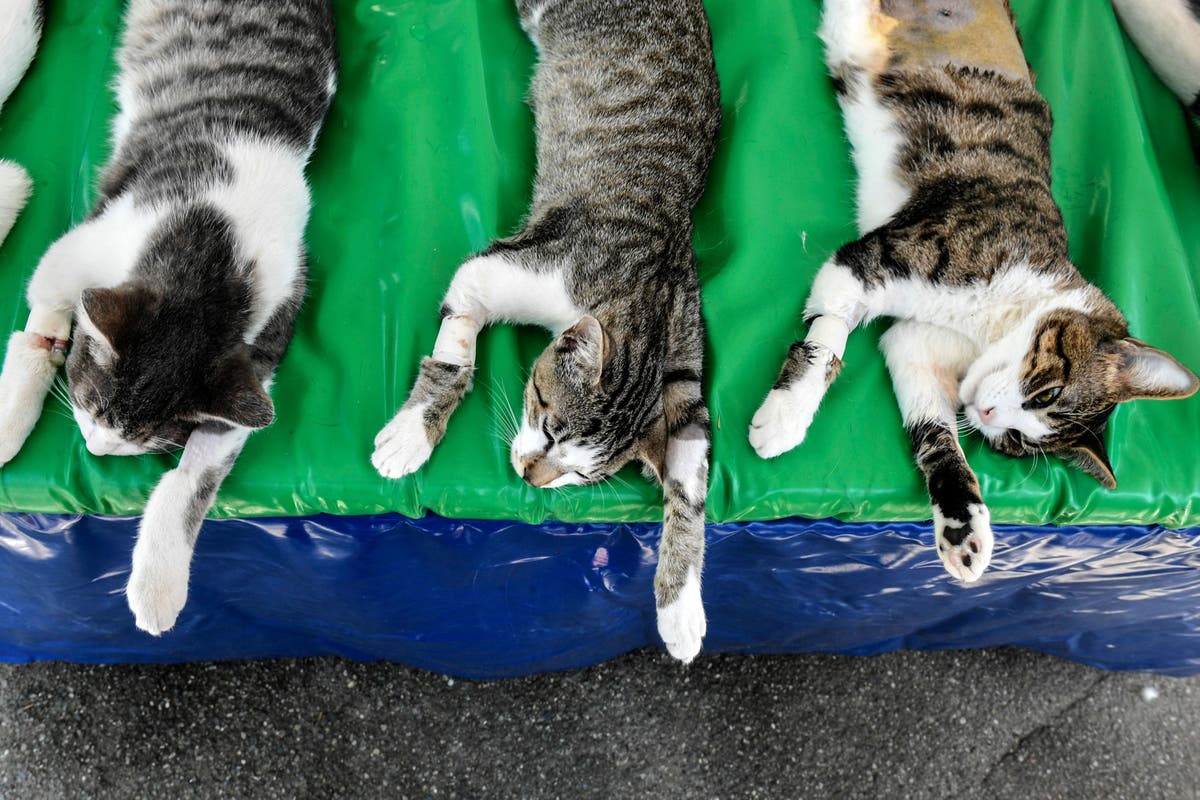