As the current summer heat wave continues to hit the Pacific Northwest, pet welfare advocates are warning families of the danger high temperatures can have on animals.

In Vancouver, multiple dogs have passed away from heatstroke, forcing one worker from an emergency veterinary hospital to issue a statement about the potentially fatal weather condition, according to a CTV News Sunday report.

While some pet owners may assume heat stoke mainly happens to pets who are left inside cars, registered veterinary technologist Tinille Mckenzie-Wyatt told the Canadian news outlet it can easily happen in backyards where animals like to lounge in the sun.

Heatstroke can happen to pets in hot backyards. American Humane recommends pet owners to have shady spots available at all times for animals that are spending time outside. (iStock)

Similarly, the heatwave has reached interior Washington, Oregon and Idaho where temperatures have fluctuated between 100 and 110-plus degrees Fahrenheit, according to the National Weather Service.

These temperatures are 20 to 30 degrees higher than average and have been dubbed “historic” by the weather service.

WHAT IS A HEAT DOME? PACIFIC NORTHWEST BOILS UNDER ITS EFFECTS

The organization says pet owners should refrain from exercising animals during peak hours and instead recommends mornings and evenings as preferable times to work out pets since these times are typically cooler.

When outdoors, American Humane is 100% against leaving pets in vehicles (even with windows cracked), and when at home in backyards the pet organization urges owners to have shady spots and drinking water available at all times.

American humane also recommends pet owners familiarize themselves with the signs of heatstroke, which could include excessive panting, dark or bright red tongue and gums, lethargy, stumbling, seizures, bloody diarrhea or vomit and comas.

According to the national nonprofit, heatstroke in animals “requires immediate veterinary attention.” However, pet owners can provide temporary relief by applying cool water on a pet’s skin with either a bath, hose or sponge until medical assistance can be reached.

“Excessive heat is one of the least recognized dangers to pets,” said Dr. Robin Ganzert, president and CEO of American Humane, in an email sent to Fox News. “American Humane is reaching out to all our networks to make sure people are taking steps to avoid exposing animals to harm and we urge every animal lover to follow these simple tips and keep their best friends safe, healthy and cool!”

President Joe Biden spoke Wednesday about the deadly heatwave hitting the western U.S. and Canada, saying “The extreme heat we’re seeing in the west is not only a risk amplifier for wildfires. It’s a threat in and of itself.”

Thu Jul 8 , 2021
For Tara Zinser, turning 22 was made even more special by Willow — a 14-week-old chocolate labrador retriever she adopted the morning of June 28, her birthday. Later that afternoon, Zinser and Willow headed over to Seventh Son Brewing Co. not only to celebrate Zinser’s birthday but also it was the […] 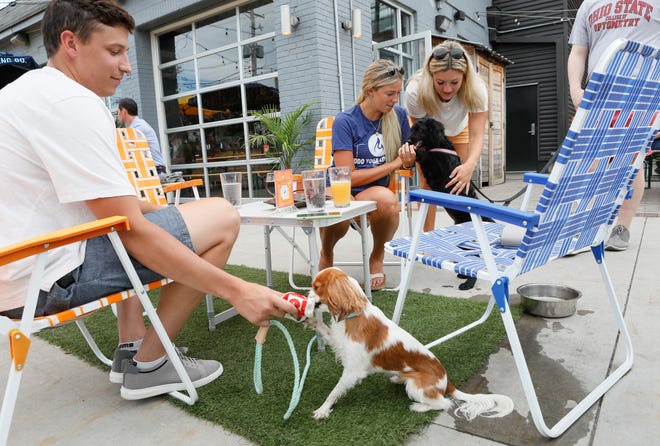