When Jill Trail first met Pihu, a frail 6-week old puppy, in India she knew she needed her care. Living on the streets, Pihu had suffered spinal injuries and infections so bad that both hind legs had to be amputated.

There was one problem: Trail lived in the United States.

She decided that didn’t matter. So, last year she worked with non-government organizations to bring the puppy to the US and ultimately adopted her. Today, Pihu is a healthy, wheelchair-bound puppy with a loving home.

“People say to me all the time, ‘God bless you for taking a dog like that,’” says Trail. “But I’m the lucky one. There’s no sacrifice on my part. Pihu is just so inspirational and packed with personality.”

But since July 14 this year, similar rescue tales are no longer possible. The US Centers for Disease Control and Prevention (CDC) has issued a temporary suspension, with no set duration, on importing dogs from over 100 countries – including India.

Pihu in her wheelchair.

The CDC says the ban is necessary to reduce the risk of rabies following a spate of falsified rabies vaccination certificates. But the move is a problem for charities across India like Kannan Animal Welfare (KAW), which often helps find overseas homes for India’s stray dogs – including Pihu.

It can be hard to find a suitable home for stray dogs in India. Many are physically and mentally disabled after suffering trauma and abuse and need a carer committed to their rehabilitation.

KAW’s founder, Vandana Anchalia, says in India stray dogs are perceived to be dirty, unattractive and difficult to train – and most Indians prefer to adopt pedigrees.

NGOs worry the restrictions could mean fewer dogs make it to safety – and many more will be left languishing on India’s streets.

KAW was started as a rehabilitation center for stray dogs that were offered for local adoption after treatment. Soon, Anchalia and her team discovered that these dogs, many of whom were physically disfigured or disabled, had a better chance of finding a home abroad.

An employee at KAW interacts with rescued strays at the KAW shelter.

In the past six years, KAW has sent about 115 rescued street dogs to the US, in partnership with US-based NGOs Operation Paws for Homes and Twenty Paws Rescue. These US-based organizations determine which dogs are the right fit, then KAW sends the dogs by cargo or with a flight volunteer to the shelters, where they are adopted.

“We have to (send dogs abroad) to maintain (lower) numbers at the shelter … if we don’t … we can’t admit new dogs. We can’t overcrowd our shelter,” says Anchalia.

Peedu’s People, an NGO registered in Texas and Punjab, has sent close to 90 dogs with special needs to the US over the past five years. Most dogs are included in its “street foster” program where dogs are vaccinated, sterilized and monitored by a resident who feeds them.

When dogs are injured too badly to survive independently on the streets, Peedu’s People tries to rehome them abroad – something they can’t do under the new CDC rules.

The organization already has a “backlog of puppies who need to go overseas, because they have no chance of surviving on the roads in India,” says founder Inder Sandhu.

Deb Jarrett, founder of Dharamsala Animal Rescue (DAR), based in the Indian state of Himachal Pradesh, says it costs around $3,000 to send a dog to the US for adoption, paid for by the charity or the adopter.

Sandhu says the ubiquity of these street dogs had desensitized many Indians to their plight.

“It’s easy for people in the US to find a dog, but they connect to the story of an Indian dog,” he says. “It’s not that Indians are not compassionate, it’s just that we’ve seen so much of it that there’s an apathy we have towards these animals.”

A stray dog afflicted with maggot wounds, rescued from the streets by Dharamsala Animal Rescue.

Life on the street comes with health risks – and that’s exactly what US authorities are worried about.

Abi T. Vanak, an ecologist at India-based Ashoka Trust for Research in Ecology and the Environment (ATREE) says in addition to human-related dangers, such as being run over by a car or abuse, these dogs are at risk of catching many diseases, including canine distemper, worms, mange and scabies.

Dave Daigle, associate director for communication from CDC’s Center for Global Health, says the temporary ban is due to a 50% increase in the number of dogs denied entry into the United States in 2020, compared to previous years. A significant number of these entry denials were for dogs with falsified rabies vaccination certificates, which “puts the US at risk of importing a dog that is not adequately protected against rabies.”

That comes with a huge potential price tag for the US. Daigle estimates that for each rabid dog imported, it could cost over half a million US dollars to contain the spread of canine rabies among the public.

Rabies is spread by dog bites and causes inflammation of the brain and spinal cord. The disease kills around 20,000 people in India each year, according to the World Health Organization (WHO), accounting for 36% of all global rabies deaths.

The WHO says a number of rabies cases go unreported, so the figures could be higher.

DAR’s Jarrett says misinformation surrounding rabies, especially in rural parts of India, makes it difficult to contain the disease. She has come across a plethora of “cures” for dog bites, ranging from “applying turmeric and chilli on the bite to drinking holy water to performing a few good deeds.”

Under the new rules, some dogs are allowed into the US – but not for adoption or the transfer of ownership. Owners must apply for a permit, and individuals can only import three dogs at a time. Dogs must be microchipped and have a rabies test a minimum of 30 days after being vaccinated against rabies, and 90 days before their arrival to the US.

With a temporary ban on sending dogs to India, addressing the country’s street dog problem needs to happen at home.

After two people requested police protection for feeding stray dogs because they were being threatened by other locals for doing so, the Delhi High Court ruled on July 1 that street dogs have a right to be fed – and that citizens have a right to feed them.

Some animal lovers welcomed the ruling, as it would prevent dogs from starving. Others expressed concern that feeding these dogs could encourage them to gather at food sources, where they could become territorial and aggressive.

Anchalia believes that while the High Court ruling was a step in the right direction, it is also important for citizens to take responsibility for the dogs they feed.

“People may feel good about feeding many dogs, but if the dog population is increasing, and puppies are just dying on the street, it is not a solution,” she says. “The way to help is to feed the dog, vaccinate it and sterilize it.”

The Animal Welfare Board of India (AWBI), set up by the Indian government as an advisory body, has undertaken animal birth control (ABC) programs to sterilize street dogs, as well as campaigns to vaccinate dogs against rabies. There are no official statistics on the number of dogs that have been sterilized as part of ABC, and the AWBI did not respond to requests for comment.

But Vanak says current programs don’t match up to the scale of the stray dog problem in India. He believes a more permanent solution would be to redirect the resources invested in ABC programs to expanding animal shelters for dogs.

“Dogs on the streets have very poor welfare outcomes. Proper welfare of animals, especially domestic animals, is best guaranteed under human supervision or under human care,” he says.

Voice of Stray Dogs (VOSD) is an animal welfare organization that has rehabilitated over 8,000 stray dogs since its inauguration in 2013. Its crown jewel is a dog sanctuary in Bangalore that is home to over 800 dogs.

The Voice of Stray Dogs

Rakesh Shukla at the VOSD sanctuary with a few of his dogs.

“It may not make sense financially, but it makes sense to me, and it always makes sense to us (VOSD),” says Rakesh Shukla, founder of VOSD, about taking in dogs with severe physical injuries. “We have a clear policy of not saying no to any dog, and we will never refuse a dog and we will never put down a dog because we don’t have enough space or money.”

“The dog problem requires a reimagination of our relationship with dogs,” he says. “You need better education for people to take good care of their dogs, and to view them as a valuable part of the landscape.”

Prior to the onset of Covid-19, DAR ran an education program in schools in Dharamsala, where children were taught how to be kind to street dogs and avoid conflict with them.

Anchalia believes the ban on the export of Indian dogs to the US may be the push needed to help change Indian attitudes and encourage local adoptions. She says the slow-paced life associated with the Covid-19 lockdown in India has opened people’s eyes to the rampancy of animal cruelty and the problems associated with stray dogs.

Anchalia believes this newfound awareness, coupled with measures to change the younger generation’s perception of free-roaming dogs, may offer some redemption for India’s neglected canines.

“The bigger responsibility lies on us,” she says. “The solution lies in all of us coming together and working for these dogs.”

Hundreds of Cats Die From Mysterious Disease, May Be Linked to Potentially 'Toxic' Pet Food

Wed Aug 11 , 2021
Over the past several months, vets in the U.K. have seen an alarming spike in the number of cats suffering from a serious and often fatal illness, the cause of which investigators have yet to identify. The illness, called feline pancytopenia, describes a condition in which a cat’s blood cell […] 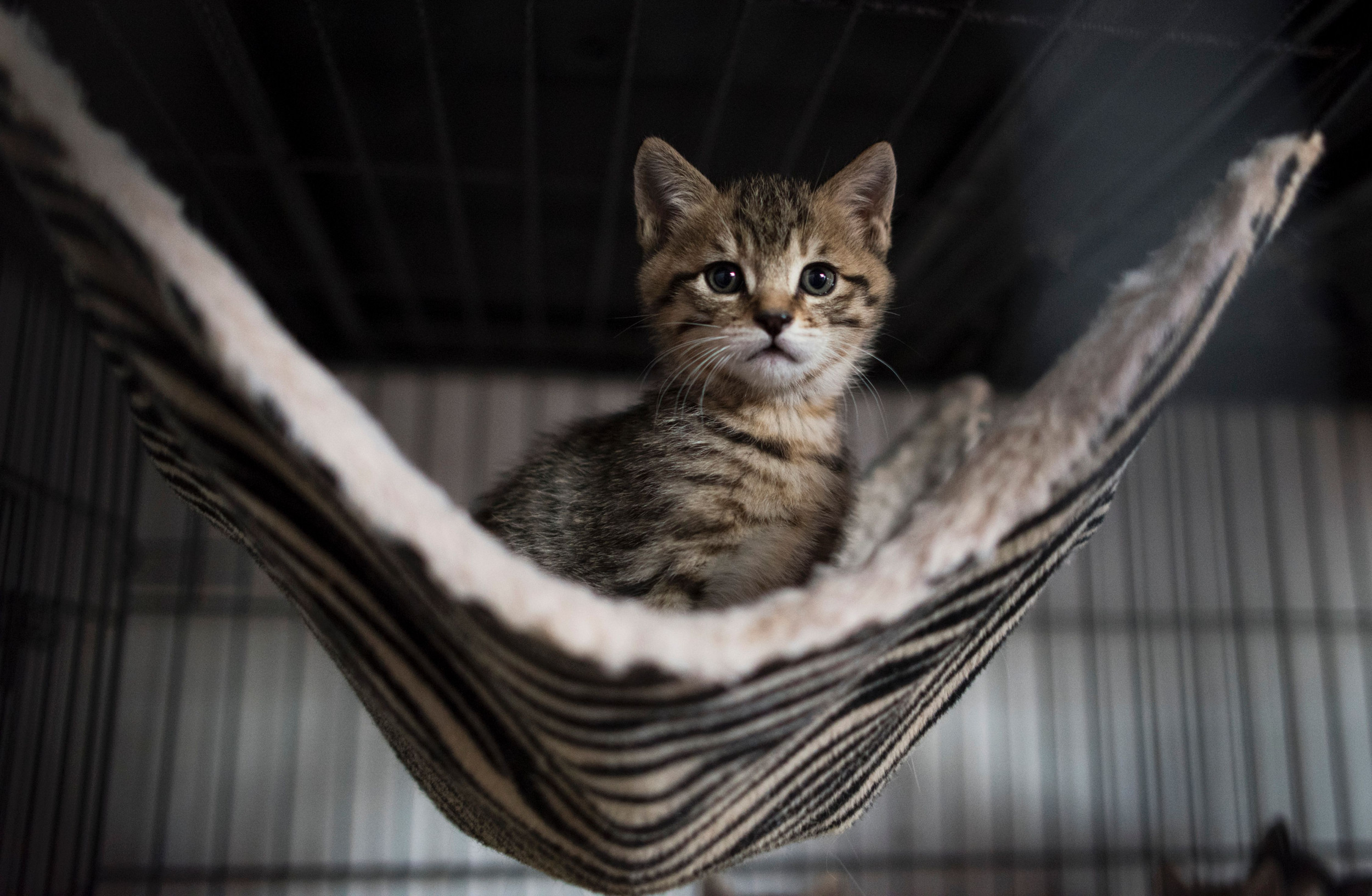