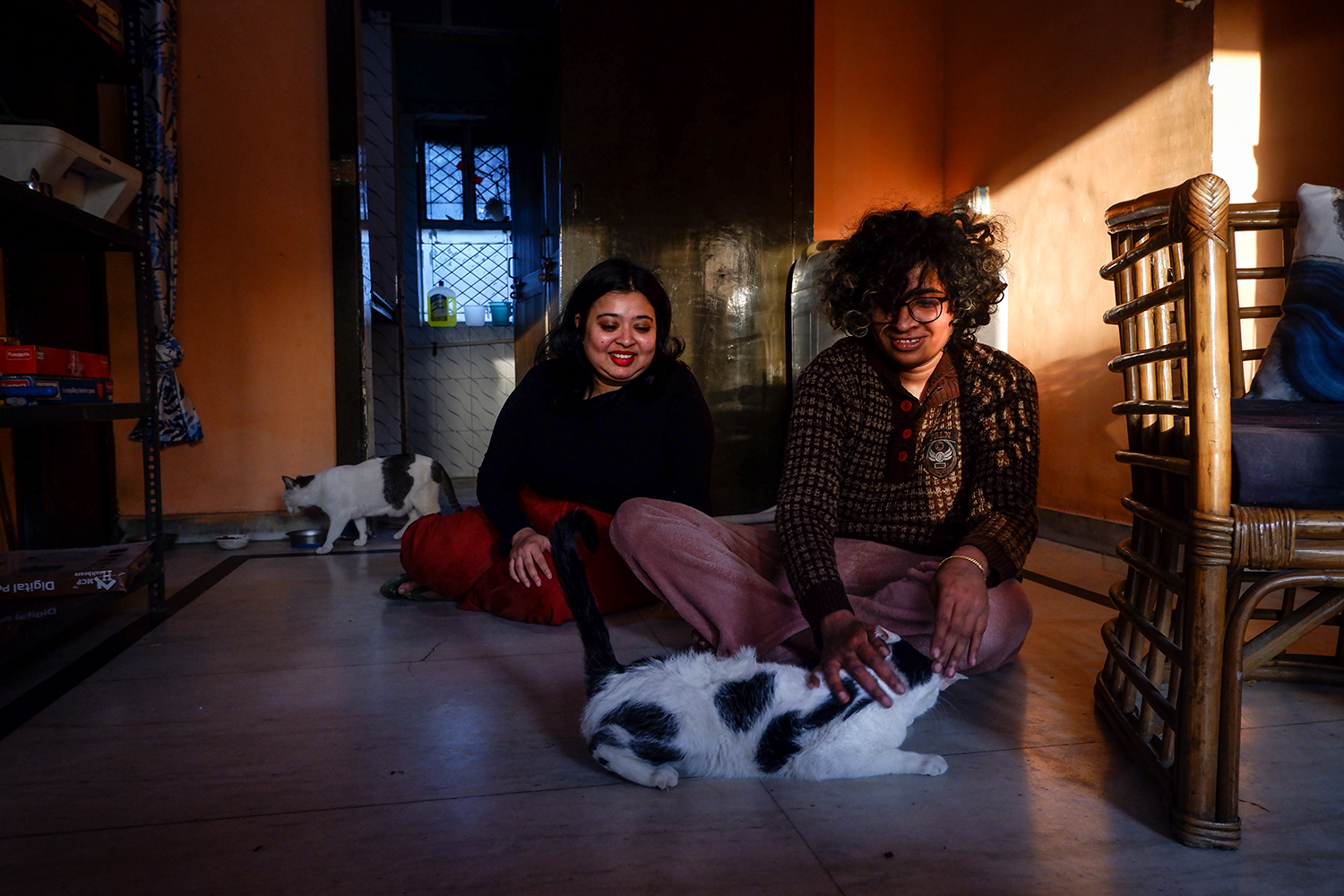 Syeda Lameeya Parween and her partner, Naina, play with their cats at their house in New Delhi on Feb. 21. Shefali Rafiq photos for Foreign Policy

Whenever 34-year-old Saher is haunted by her past and thoughts of abandonment, two things instantly calm her down: cooking and her pets.

Saher, a transgender woman from the northern Indian state of Uttar Pradesh, has had a roller coaster of a life. Now a medical professional, Saher was disowned by her family after she underwent gender-confirmation surgery.

The decision to do so came after decades of suffering. Saher said that for a long time, even into puberty, she was not aware of her gender identity as her mother had kept her shielded from people she called “bad company.”

While pursuing a master’s degree at a college in southern India, Saher had a realization. “A professor at the college who was also a trans person told me to visit a doctor and get myself checked,” she said.

Lesbian, gay, bisexual, transgender, queer and/or questioning, and intersex (LGBTQI) people in India live a secluded life and often end up sacrificing their identity for the sake of their family. “They fear both the society and the stigma revolving around being one of the community members,” said Gulfam, an activist and advocate.

When she was 27, Saher agreed reluctantly to an arranged marriage. “I contacted the girl and told her to deny the proposal of my family. She told me that she was as helpless as me,” Saher said.

The marriage lasted only six months. “Despite trying everything and even going to a sexologist, I could not satisfy her physical needs,” Saher said.

The failed marriage cost Saher more than $12,000. “Her family filed a case of harassment against me, and I had to pay 10 lakh rupees to settle the case, which ended only last year,” she said as one of her pets, a cat named Marcos, sat on her lap. 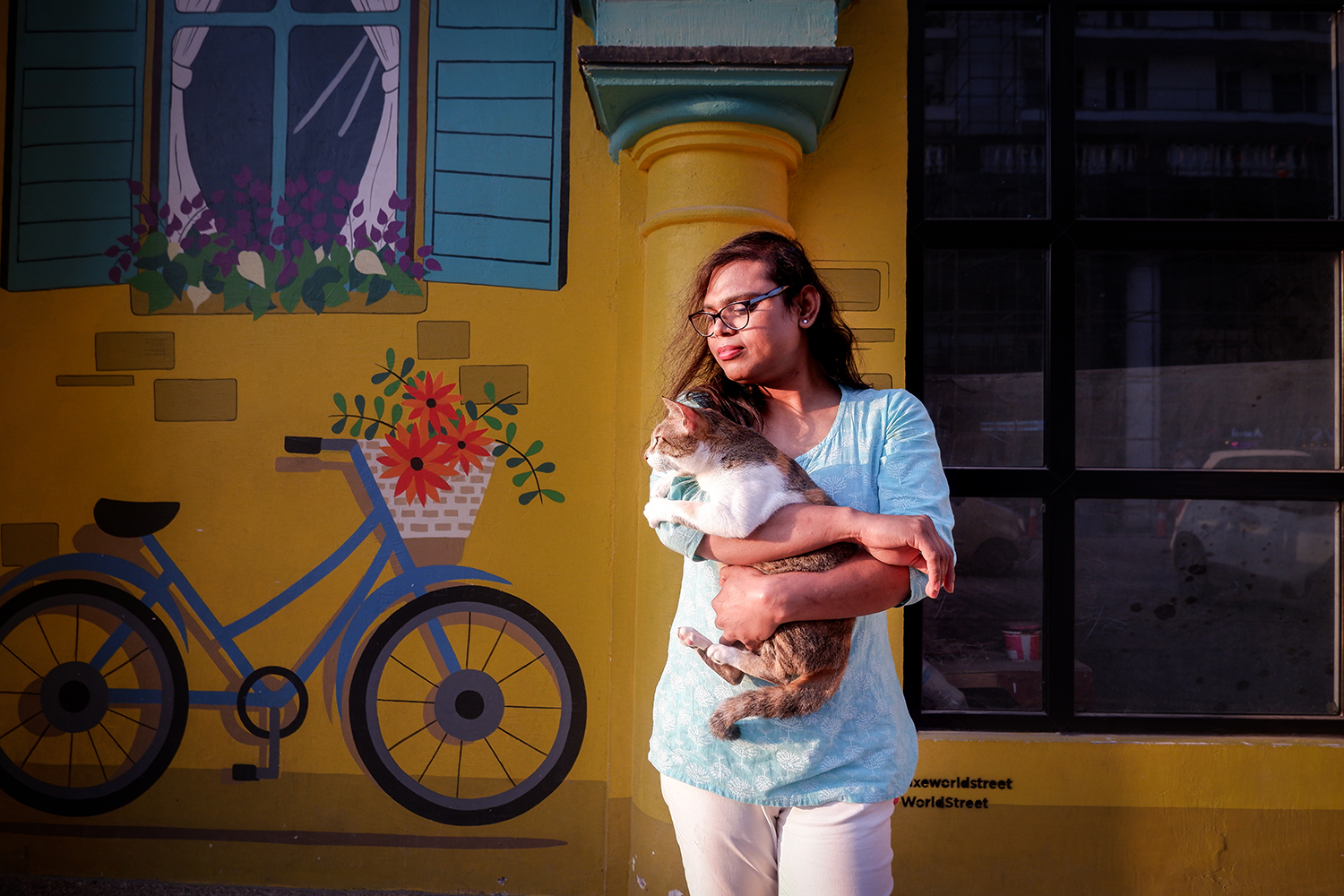 Saher poses with her cat—also seen below—in Faridabad, a city in the Indian state of Haryana, on March 5. 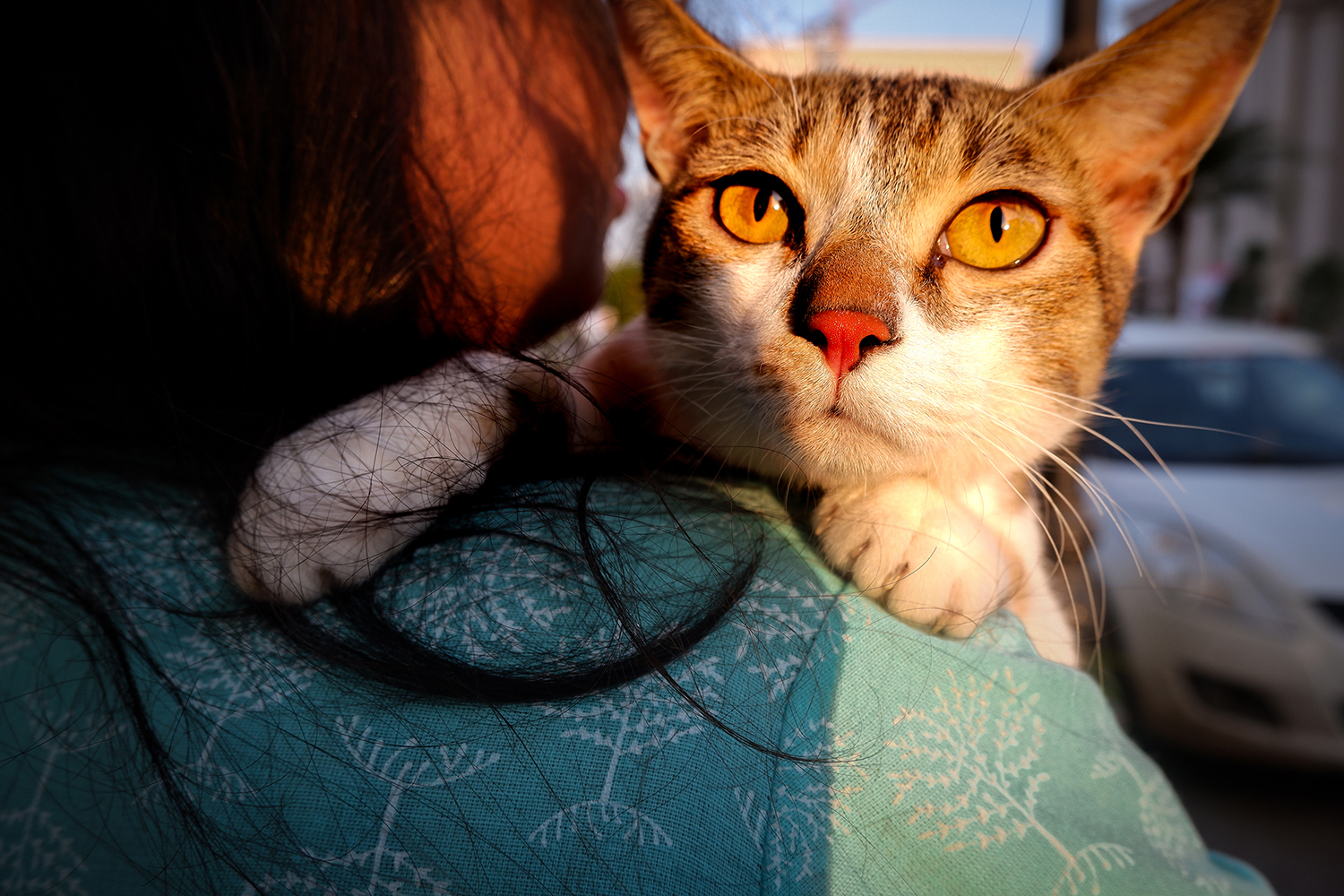 Saher has two cats, both adopted during India’s lockdown, which restricted the movement of more than a billion people for various periods over almost two years. Saher’s cats have given birth to four kittens, and Saher said she “will raise all of them like my own children.”

In 2018, Saher’s family accidentally discovered her gender identity after a photograph of her wearing a sari made its way to her father’s phone. A relative had seen it on Facebook and sent it to him. Her family was shocked, but, Saher said, they also “had a good laugh over it.” She added that they warned her not to “do anything outside your home and that nobody should know about your gender.”

Undeterred, Saher underwent surgery shortly afterward. “I said to myself, for all my life I have lived for my family. Now it is time to do something for myself,” Saher said. A month later, her family learned of her surgery. “My father attempted suicide, and my mother till this day does not talk to me,” she said.

This isolation from her family led to depression and anxiety. “I was on meds for over 18 months and was undergoing therapy,” Saher said.

During that period, someone suggested she adopt pets. “My pets have been my biggest support,” Saher said. “Whenever I miss my family, they act as my cushion. They know when I am down and help me overcome it. My loneliness is filled by my pets.”

Trans activist and advocate Aqsa Shaikh said queer people often have complex relationships with their families and can seek kinships and even something approximating familial ties with pets and sometimes plants. “As they say, animals and plants don’t judge on the basis of religion, gender identity, or sexual orientation,” Shaikh said. “They only offer unconditional love.” 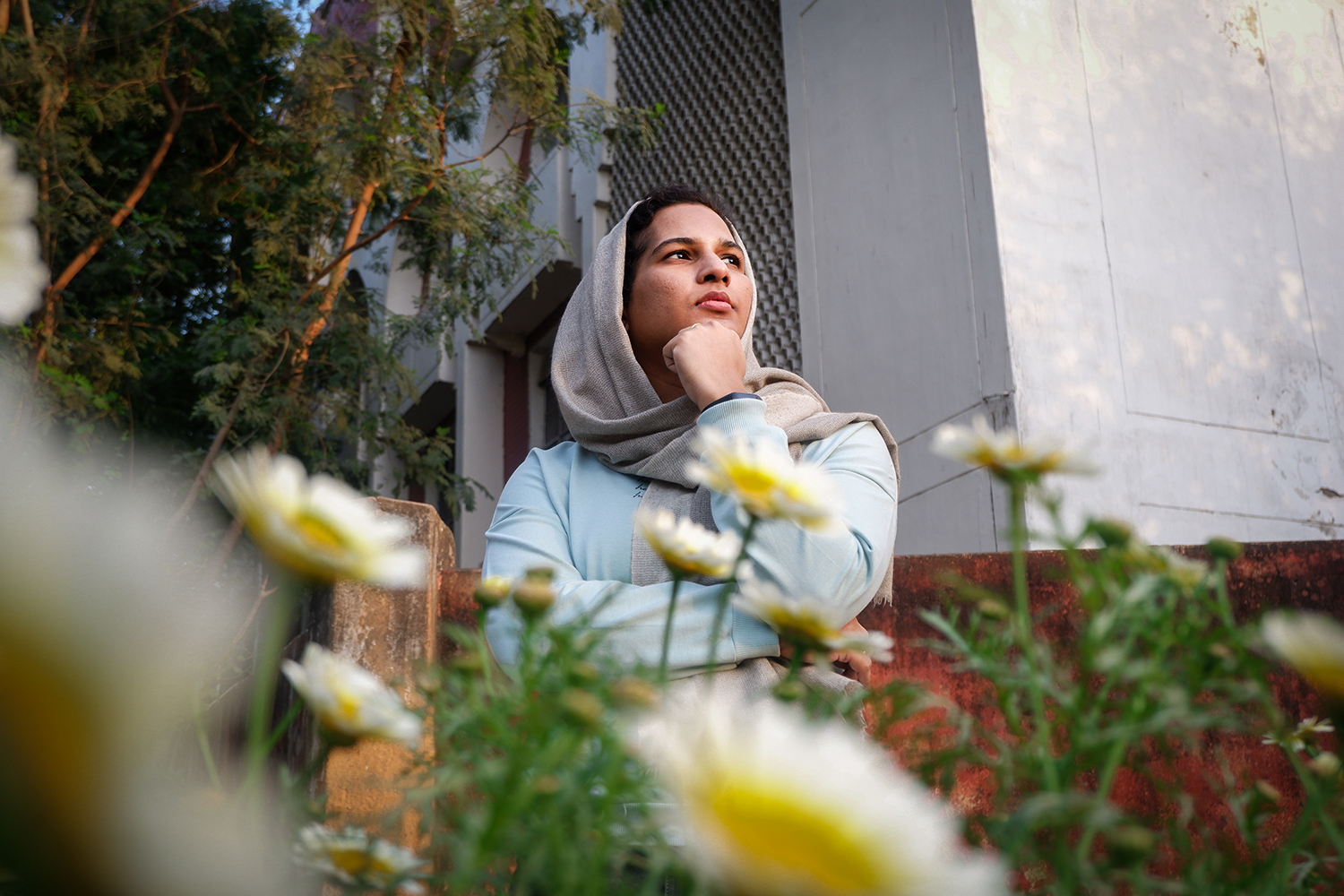 Aqsa Shaikh, 39, a doctor and professor at Jamia Hamdard University, in New Delhi on March 2. She is a transgender activist and advocate in India.

LGBTQI Muslims such as Saher can face additional hardships. Gulfam said that while it is increasingly difficult for queer people to gain acceptance in Indian society, it is even harder for queer Muslims.

“The country has largely turned against Muslims, and the families can’t take the dual pressure of being a minority and then a minority within a minority,” Gulfam said. He is referring here to the rule of Prime Minister Narendra Modi, a Hindu-nationalist leader under whom Muslims have become targets of lynch mobs and hostile media.

For 31-year-old Syeda Lameeya Parween, one of the thousands of Muslim LGBTQI people who have either not been accepted for who they are or have had to hide their identity, February 2020 is the month she can never forget.

Originally from Jorhat, a small district in the northeastern state of Assam, Parween, a psychologist, spent almost 10 months with no one but her pets—two cats and a dog—in her three-room flat in New Delhi. This, after her 28-year-old partner, Naina, fell severely ill in the month of February and had to spend time at her parents’ home.

Talking about the ordeal, Parween recalled, her voice choking with emotion, that her pets “kept me alive. … My partner was dying, and I could not share it with anyone. Not even my family, as they were not willing to listen. They have no idea that Naina was on the verge of dying. I had to figure it out all by myself. My pets were the reason for me to get up every day.” Her pets, Parween said, “honestly saved my life.”

Parween, who came out to her parents in 2018, said of that event, “My mom was like, it is better for me to die. And after that my parents were like, this conversation never happened. They were in complete denial. They literally just did not listen.”

Pets have been nothing short of a miracle for her. “They are my family. We call them babies,” she said. 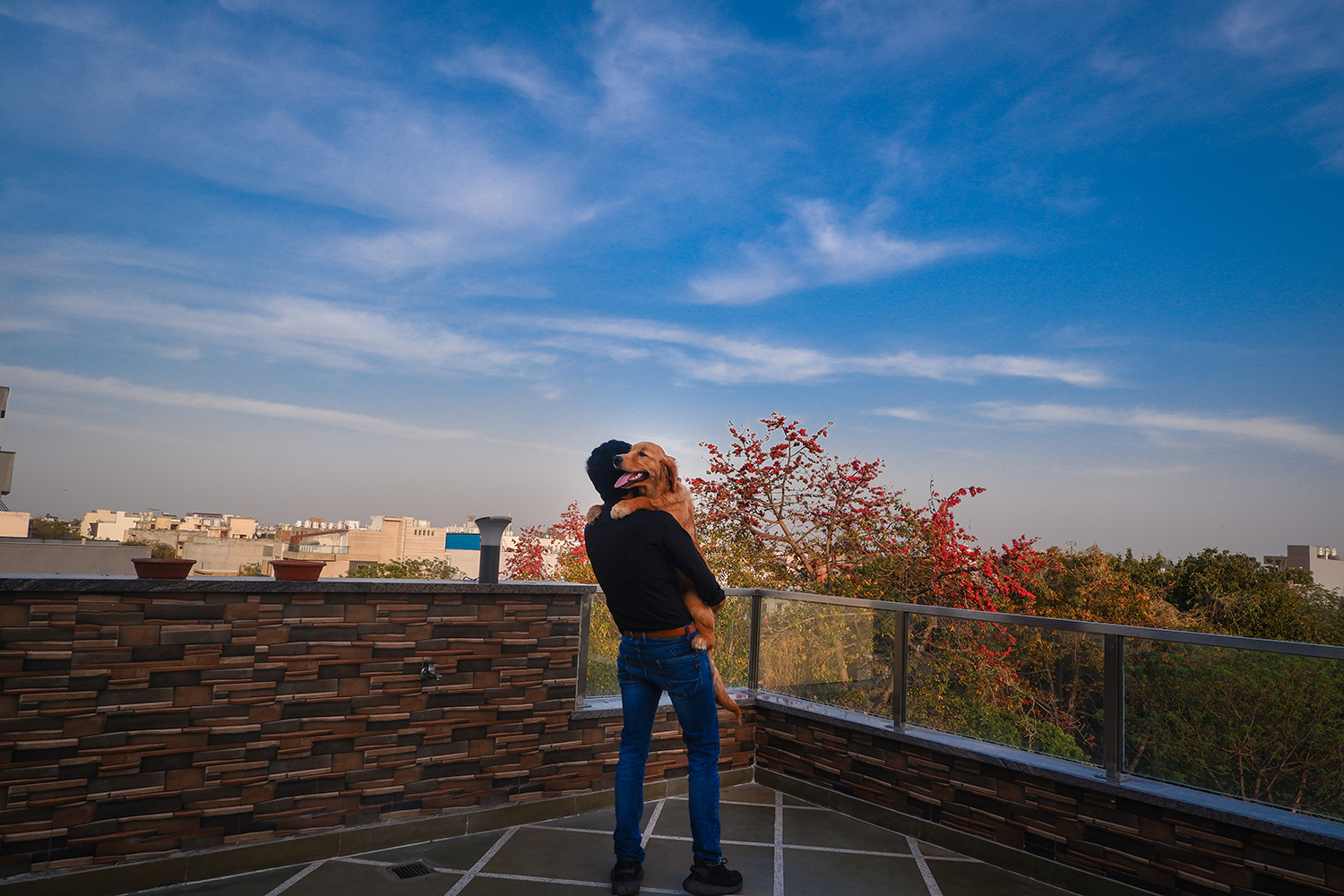 Shadab hugs his friend’s dog, Leo, at their place in West Delhi on March 12.

Shadab, whose name has been changed to protect his identity, yearns for a dog. The 28-year-old gay man from New Delhi, pursuing a Ph.D. at a reputed university in the capital, is an ardent dog lover—but is not allowed to keep one. “It has been a battle of years to persuade my family to keep a dog. They don’t allow it,” he said.

Many Muslims, in India and elsewhere, believe that dogs are considered impure in Islam. Recently, Iran’s parliament proposed a law to make it illegal to possess dogs and other so-called “unclean” animals. For Shadab, not having a dog is a double whammy: Not only is his extended family unable to accept his identity, but he also has to deal with a family that doesn’t allow him to have a dog. “Since childhood, I have been requesting my family to give me a dog, but they keep on insisting that the animal is dirty,” Shadab said.

A lifelong animal lover, Shadab has tried to make up for not being allowed a dog by finding love and support in the birds that his parents have gifted to him. When he was too scared to share his sexuality with his parents at age 14, he found refuge in a parakeet. “The first living being to know that I am a gay was my pet parakeet,” Shadab said.

Shadab said pets have been the support that his extended family or friends could never offer. “At the beginning, it was very hard for my family to accept my reality.” Later, Shadab continued, “after years when I kept on insisting that it was something that I had no control over, they began to see a humane side of me.”

Garima Srivastava, a psychotherapist in New Delhi, said pets have the capacity to be there for us “no matter what.” “Unlike our other relationships, which are often conditional in nature … a pet is always equally excited to see us and make us feel loved and significant,” Srivastava said.

Let Slip the Dogs of Diplomacy!

A very brief recent history of animals in foreign affairs.

Shadab said he has found it very hard to be accepted by his faith community, with members often citing their interpretations of the Quran and hadiths about homosexuality. The fact that he might never be accepted as gay by his family, and that he will never openly come out as gay, does not stop Shadab from spending time with his friend’s dog, Leo.

Spending time with Leo is “exhilarating,” Shadab said. “It is like hugging your own family member and relieves all the stress.” Shadab’s friend nodded and added, “He brings Leo gifts, and I can see both are happiest when they are with each other.”

Shadab, who does not currently live with any pets of his own, said he will never stop visiting Leo. “He is my only support and stress-buster,” he said as the dog lay by his chair.

While Shadab and Saher don’t plan on starting families anytime soon, Parween has decided to get married to Naina. Soon she’ll tell her parents this, when they visit New Delhi. It remains to be seen if Parween will finally find acceptance for who she is from her family.—Saqib Mugloo

Sun Apr 24 , 2022
Some people see a dog out in public as an open invitation to approach and them, but it’s rude, and possibly dangerous to pet without permission. Maybe your dog is nervous or reactive around strangers, which can traumatize them or provoke an attack. Maybe they’re perfectly content with their inner […] 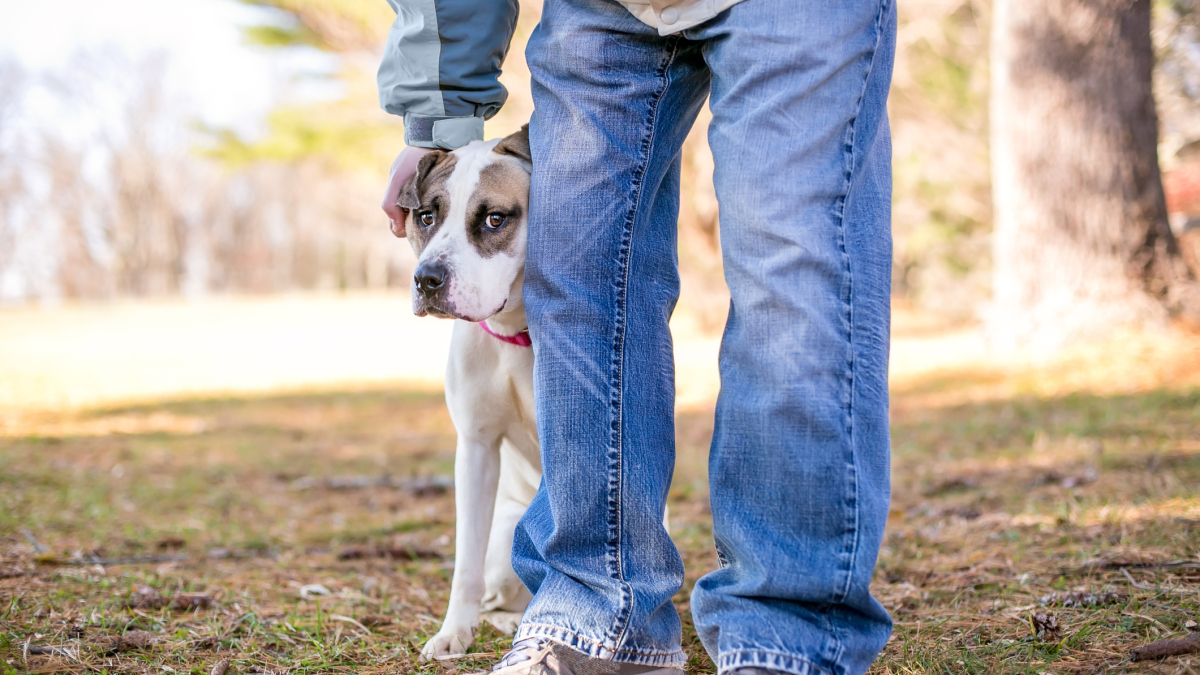