The day before filming her first television commercial, influencer Brooklinn Khoury felt “super insecure” about taking a selfie with a zit on her upper lip, so she cropped it out.

Fifteen minutes later, Khoury’s entire upper lip and parts of her nose were torn off her face in a dog attack.

What does an Instagram influencer do when a key moneymaker — their face — is dramatically changed in a way that doesn’t correlate with traditional beauty standards? For Khoury, it meant reevaluating her personal brand and relationship to social media, which in turn brought her more followers.

A month before the November 2020 dog attack, Khoury was featured in a Vogue spread of women skaters, a big moment for an influencer who then only had 13,000 followers.

Her modeling career halted after her physical changes, but Khoury kept posting — airborne skate tricks, with a face bandage or a hand covering her nose and mouth area, and lots of LA “hug someone you love today” vibes.

Going through a traumatic event made her more relatable to followers, who responded to an influencer looking less cliché perfect. She began earning about $1,000 per post from sponsors. And when she announced her relationship on Oct. 7 with Dance Moms star Chloé Lukasiak — who has 6.6 million Instagram followers — her own count skyrocketed to more than 50,000.

Khoury feels conflicted about Instagram — she relies on the visual platform for income but called it “toxic” for younger women.

“Beauty is so prescribed in so many ways,” Khoury told BuzzFeed News. “I don’t want to go on social media and feel like I’m not a whole person, looks-wise.”

Researchers within Instagram found that 32% of teen girls said the platform aggravated their existing bad feelings about their bodies, according to company documents reported on by the Wall Street Journal. A 2020 study found that Instagram causes young women to compare their appearances and have lower satisfaction with their bodies.

“There’s the algorithm that shows you more of the same content that you’re already viewing,” Fardouly said. “If you’re already more vulnerable … then Instagram is going to recommend more and more of those posts.”

At the same time, Khoury said, she “loves” Instagram because it’s connected her with business opportunities, namely DC Shoes, which DM’d her in March 2021 and offered her a spot with the brand’s women’s skateboarding team.

On Nov. 3, 2020, Khoury was excitedly preparing to film her first major television commercial, surfing and skateboarding in front of cameras, but while visiting family in Arizona, her relative’s dog lunged at her face.

“It was probably on me for a good 30 seconds,” she said, “just shaking my head like a toy, ripping my upper lip and parts of my nose off.”

She stayed alone in the hospital for three days due to COVID-19 restrictions. Her then-agent asked if she would “get over” the accident and make the commercial shoot. She said no.

Back home with her parents in Mission Viejo, California, Khoury started posting on her YouTube channel about her road to recovery, documenting everything from her first meal since the attack to how she changed the bandages on her face. Her first video, one week after the accident, has amassed nearly 200,000 views.

Nearly 10,000 people are hospitalized annually in the US for dog bites. Now Khoury receives at least 10 DMs per week from dog attack survivors sharing their stories or thanking her for telling her own.

“I just decided there’s no reason to hide how I am,” Khoury said. She also changed how she uses social media, such as not using filters and curating her feed to be about skateboarding. She steps away from Instagram when she notices she’s feeling bad about herself, and her “favorite” account is Shake My Beauty, which highlights body differences.

But some experts dispute the effectiveness of using social media to encourage body positivity.

“I’m sure like many people in the space, Brooklinn is coming from a place of goodwill,” said Heather Widdows, professor at the University of Birmingham and author of Perfect Me: Beauty as an Ethical Ideal.

Widdows is vocal about issues with the body positivity movement, the onslaught of social media messaging that urges constant resilience and self-love for all body sizes, and said no matter how influencers like Khoury try to manifest a happier, more inclusive Instagram from the inside out, it’s still a space that embodies detrimental beauty standards.

“Often you find that people who are trying to push back actually conform to many aspects of beauty,” Widdows said to BuzzFeed News.

This month, Khoury is preparing for the first of many risky reconstructive surgeries. The procedure involves taking an artery from Khoury’s arm and skin from her body to create tissue that moves and acts just like a lip. The first operation, which will help protect her currently exposed gums, costs $400,000 and requires at least five follow-up surgeries.

Khoury said she had come to terms with “rocking her no-lip forever” and doesn’t intend the surgery to be a career boost, even if she hopes for a physical change. “I know I’m not going to look the same,” she said. ●

Dog sits on cat and this is what happens next. Watch | Trending

Sun Nov 7 , 2021
Within seconds of this cat lying peacefully on the bed, we can see that there is also a dog in the household who ends up sitting not just on the bed but also on the cat itself. Pets make our life so much more enjoyable! This is perhaps one of […] 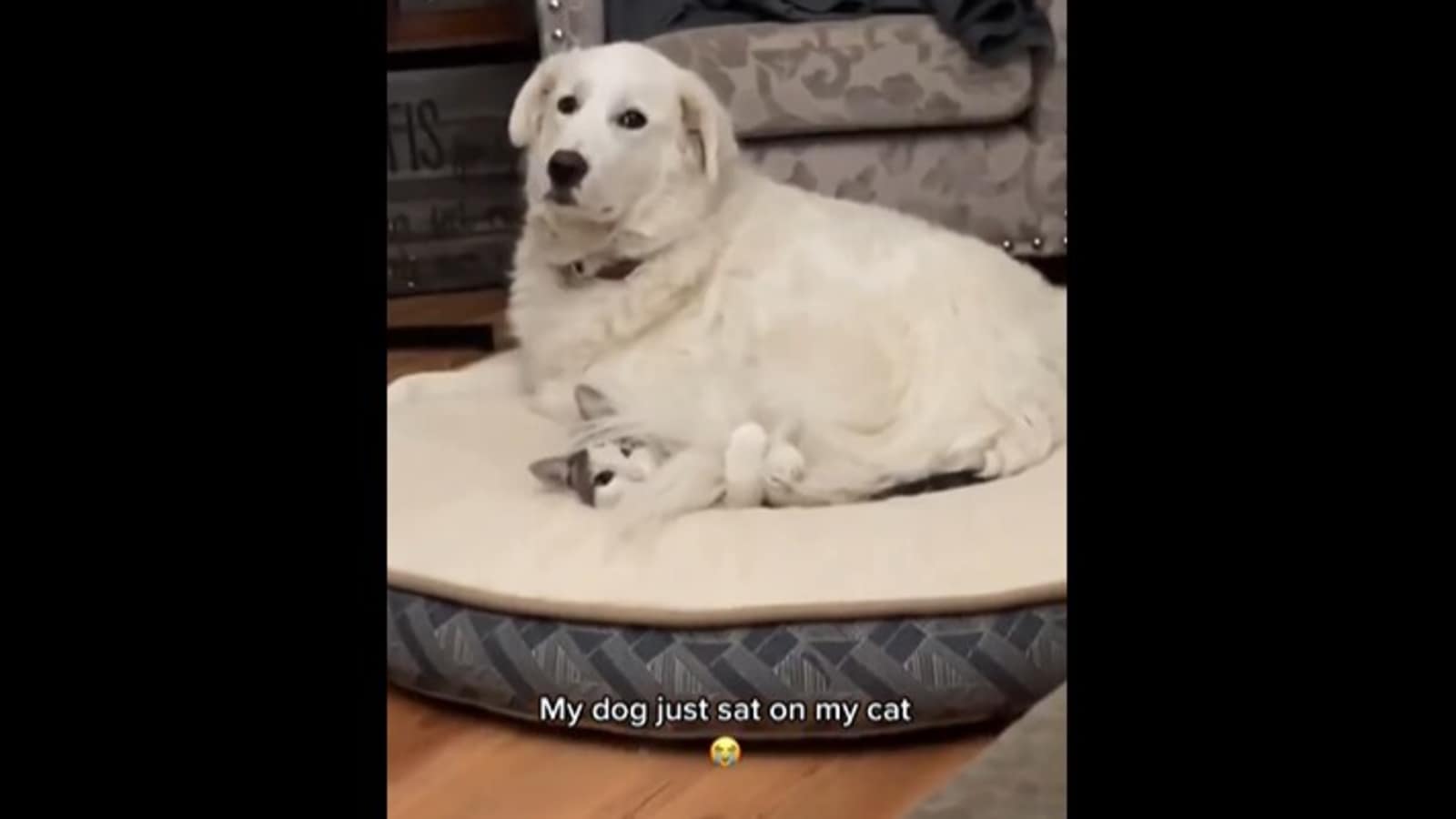