“I love that we’re reversing the question,” said Dr. Dana Varble, the chief veterinary officer for the North American Veterinary Community. “In general, it is a very good thing for animals to sleep with their people.”

Pets who share their human’s bed tend to have a “higher trust level and a tighter bond with the humans that are in their lives. It’s a big display of trust on their part,” Varble said.

“Dogs and cats who are more closely bonded with their humans get additional health benefits, including increases in beneficial neurotransmitters such as oxytocin and dopamine, the feel-good hormones,” she added.

Is it just dogs and cats who benefit from human bed partners? Yes, Varble said, with a “very, very few exceptions.”

“I have one owner who has a meticulously groomed pot-bellied pig who sleeps at the foot of their bed,” she said. “It’s an indoor pig named Norbert — pot-bellied pigs are almost like dogs because they’re very social.” (Norbert even has his own Instagram account.)

Pros and cons for humans

With that important matter out of the way, let’s turn to you — is it good for you to sleep with a pet? Experts have traditionally said no because you might not get quality shut-eye.

“Animals may move, bark and disrupt sleep. Sleep in dogs (and cats) is not continuous and they will inevitably get up and walk on the bed, stepping on people. All of that activity will lead to sleep fragmentation,” said Dr. Vsevolod Polotsky, director of sleep research and a professor in the department of medicine at Johns Hopkins University School of Medicine.

These “microawakenings,” which can happen without your awareness, “are disruptive because they pull you out of deep sleep,” said Kristen Knutson, an associate professor of neurology and preventive medicine at Northwestern University’s Feinberg School of Medicine. “They have been associated with the release of the stress hormone, cortisol, which can make sleep even worse.”

That may be true for many of us, but recent studies have shown that pets in the bedroom could be beneficial for some of us.

“People with depression or anxiety may benefit from having their pet in the bed because the pet is a big pillow, a big blanket, and they may feel that snuggly, cuddly, furry creature decreases their anxiety,” said sleep specialist Dr. Raj Dasgupta, an assistant professor of clinical medicine at the Keck School of Medicine at the University of Southern California.

Data gathered in 2017 from the Mayo Clinic’s Center for Sleep Medicine in Phoenix found over half of pet owners seen in the clinic allowed their pet to sleep in the bedroom — and the majority found their pet “unobtrusive or even beneficial to sleep.”

About 20% however, did believe their furry friends made their slumber worse.

Another 2017 study put sleep trackers on dogs and their humans to measure the quality of repose for both. People who had their dogs in their bedroom got a decent night’s rest (and so did the dogs), the research team found.

However, sleep quality declined when people moved their dog from the floor to the bed.

Children may benefit from sleeping with a pet as well. A 2021 study asked adolescents ages 13 to 17 to wear sleep trackers for two weeks and then undergo a state-of-the-art sleep test. About a third of the kids slept with a pet, the study noted, which didn’t appear to affect the quality of their rest.

“In fact, frequent co-sleepers showed similar sleep profiles to those who never slept with pets,” the authors wrote.

“All of this suggests that having pets in the bed or bedroom is not necessarily bad,” said Dr. Bhanu Prakash Kolla, a sleep medicine specialist in the Center for Sleep Medicine at the Mayo Clinic in Rochester, Minnesota.

“There can be significant psychological comfort in having your pet close by, which can help both initiate and maintain sleep,” Kolla said.

“However, if patients are reporting that movement or other activities of the pet are disruptive to their sleep we then counsel them to try to look at alternate arrangements for the pet at night and see if that helps with their sleep,” he added.

Sign up for for CNN’S Sleep, But Better newsletter. You’ll get science-based guidance for sleeping better tonight and every night.

A setup for success

Successfully co-sleeping with your pet has a lot to do with how deeply both you and your pet sleep, says clinical psychologist and sleep specialist Michael Breus, the author of “Good Night: The Sleep Doctor’s 4-Week Program to Better Sleep and Better Health.”

“Dogs are usually good for an entire night but cats can be very nocturnal,” Breus said, adding that another factor is how “much you both move, as movement by the animal can wake the human and vice versa.”

Pets, like people, can also snore and disrupt sleep, so be sure to take that into account, Breus said. Small dogs and cats often like to snuggle under the covers with their people, but that can raise your body temperature and disrupt your sleep. (The best sleeping temperature is a bit chilly, at 65 degrees Fahrenheit or 18.3 degrees Celsius.)

If you’re thinking of bringing your fur baby to bed, Breus suggested you give it a try for only a couple of nights, so that you don’t condition your pet to expect it before you decide if it’s good for you.

Some of us should abstain

Despite the new science, many of us still need to think twice about bringing our dogs, cats or indoor pigs into our beds.

“It is particularly harmful in people with insomnia or in patients with other sleep disorders — patients with delayed sleep phase (night owls) or even in folks with sleep apnea, who wake up from breathing cessation and then are unable to go back to sleep,” Polotsky said.

Up to 30% of the American public suffers from insomnia and at least 25 million adults suffer from obstructive sleep apnea, according to the American Academy of Sleep Medicine.

“Insomniacs are the most susceptible,” Polotsky said. “Co-sleeping with pets will not necessarily predispose or precipitate insomnia, but it might perpetuate it.”

Anytime your sleep cycles are interrupted, you disturb the brain’s ability to repair itself on a cellular level, consolidate memories, store new information, and ready the body for optimal performance.

The “sweet spot” for a proper rest is when you can slumber continuously though the four stages of sleep four to six times each night. Since each cycle is roughly 90 minutes long, most people need seven to eight hours of relatively uninterrupted sleep to achieve this goal.

A chronic lack of solid rest, therefore, impacts your ability to pay attention, learn new things, be creative, solve problems and make decisions.
It gets even darker: Studies find people who experience frequent night awakenings are at high risk for developing dementia or dying early from any cause as they age.

There is another reason why snuggling with pets all night may not be good for your health. If you are one of the millions of people who suffer from asthma, allergies or chronic obstructive pulmonary disease, sleeping with a furball could become a nightmare.

“And I tell them, ‘Yes, but remember, allergens are in saliva, they are in the dog’s skin. So you’re gonna be exposed to allergens for eight hours at night and suffer watery eyes and a stuffy nose. That, along with the animal’s movement, could well prevent you from getting some good sleep,'” he said.

Some pets should not join the family bed

Let’s get back to what’s best for your pet: When is it not a good idea for a furry friend to sleep with you?

“Obviously, young puppies or dogs that are working through behavior issues — it might not be good for them to sleep with you,” Varble said. “If you have a dog with anxiety, we teach that kennels are a safe space.

“Kennels that have three sides make them feel like they only have to ‘protect themselves’ from one angle. We want to teach them that there’s a secure place in your house,” she said.

And there are some pets, Varble said, you should never invite to bed to spoon.

“I work with exotic pets, and a lot of them have very specific health and safety requirements, including being in an enclosure,” Varble said. “So while I know people who are very close to their ferrets and their guinea pigs, they need to be in their enclosure for their health at night. Those are not animals that we would want to have in bed with us.”

Sun Nov 7 , 2021
A pair of hapless hounds have earned the affections of dog lovers everywhere thanks to their fruitless attempts at trying to eat whipped cream from a can. In a video posted to TikTok by twowillowsmarkellc, fans saw Ammo and Nala, two five-month-old American Bully dogs, trying their darndest to eat […] 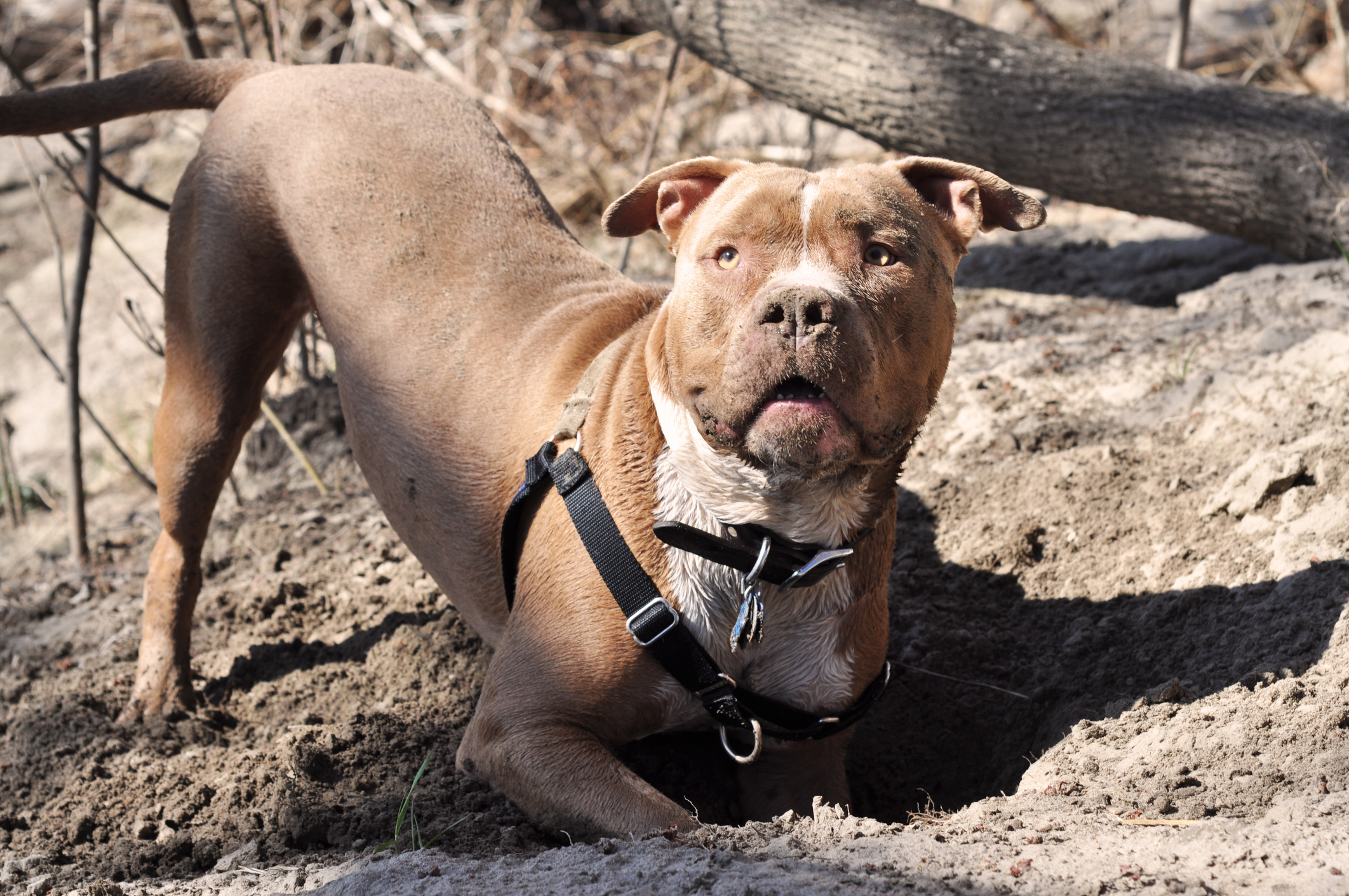