“Why cats?” This innocent question arrives midway through “The Electrical Life of Louis Wain,” hovering over it like a mischievous smile. For some of us, of course, the only answer to this query can be: “Why not?” The answer was far more complicated for the real Wain, a British artist who in the 1880s became well-known for his distinctive, playful drawings of cats; his fame helped deepen a national appreciation for the Felis catus.

Wain’s work is easily found online, and while you may recognize it, the man remains more elusive. The modesty, ubiquity and naïveté of his art played a role. The drawings were mass produced, for starters, first appearing in newspapers that were probably soon used to wrap fish and chips (or torn into bits for the privy). They were also widely circulated on postcards, greeting cards, children’s books and other ephemera. But because he didn’t copyright most of his work, everyone owned it. The images were commodities of the humblest, most populist sort, not rarefied art-market fetishes.

“The Electrical Life,” a poignant biographical portrait starring an irresistible Benedict Cumberbatch, helps bring the man into focus, even if it is all a bit fuzzy. It’s tethered by a garrulous, lightly funny script by Simon Stephenson and the director, Will Sharpe, who’s taken on the material with both kindness and an elastic, mildly frisky approach toward the medium. In its biopic sweep, the movie is conventional, with a not-quite-cradle to not-quite-grave trajectory that allows Cumberbatch to inhabit the character across time, as Louis (pronounced Louie) matures, falls in love, finds fame and endures a series of crushing blows all while creating his magical, mystical cats.

Perhaps you are anxious to know more; maybe you are already gagging and not on a hairball. Despite their strange yet understandable YouTube eminence, cats are not for everyone, regrettably, and probably neither is “The Electrical Life.” It doesn’t help that the first few scenes jump around in time — it opens with an aged Louis and then shifts to his past, a tiresome framing device — and have the fussy, fluttering energy of a host who’s worried her party will be a bust. There’s a monochromatic funeral, a wash of dingy color and figures moving in slow-motion, and then, bam, Louis is racing around his clamorous London home alongside his mother and five unmarried sisters.

Sat Oct 23 , 2021
Washington, DC—The Animal Welfare Institute (AWI) is urging the US Department of Commerce and the US Department of Agriculture to initiate enforcement actions against Miami Seaquarium (MSQ) for failing to protect the health and welfare of its animals, particularly Toki (also known as Tokitae, Lolita, and Sk’aliCh’elh-tenaut), the world’s oldest […] 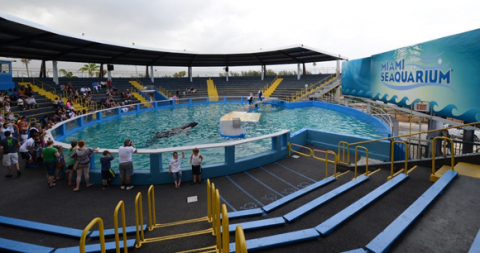