A dad who never wanted a dog has a very special bond with her.

TikToker Den doesn’t post frequently, but when she does, it’s usually a video of her dad’s workout routine with the family dog.

Her dad didn’t always want the canine, which she received from a friend, but he has since drastically changed his tune.

“How my dad stretches our dog,” Den wrote in the caption.

The dog was practically doing a handstand. The father held the dog’s hind legs up while it stood on its front to feet.

The dad rubbed from the canine’s belly up to its toes. Then, he placed the dog’s hind legs back down. The dog gleefully sat in front of the father as if to ask what exercise they were going to do next.

“For everyone asking what breed she is, I’m honestly not sure. One of my best friends gave her to me, and she got [the dog] at a pulga (flea market),” Den explained.

The hilarious video received over 48.4 million views on TikTok.

“The same dads who say they don’t want a dog are the ones to do this kind of stuff,” a person wrote. Den replied, “When I first got her, he did NOT want her, I’ll tell you that.”

In The Know is now available on Apple News — follow us here!

If you enjoyed this story, check out the chocolate Lab who can’t contain her excitement when Dad comes home.

The post Dad who ‘never wanted a dog’ now lovingly ‘stretches’ her every day: ‘This looks like it feels so good’ appeared first on In The Know.

More from In The Know:

Dad spends $400 in vet bills to diagnose limping rescue dog, makes shocking discovery: ‘Bless him, this is so cute’

Hurry! The best-selling Sonos Beam soundbar is $60 off for a limited time

Fri Feb 11 , 2022
BOULDER, Colo. (KDVR) — A Boulder veterinary center helped improve the life of a sweet little orange tabby cat that barely made it out of the Marshall Fire with his life. The Humane Society of Boulder Valley, along with the help of a nearby emergency veterinary clinic, said it started […] 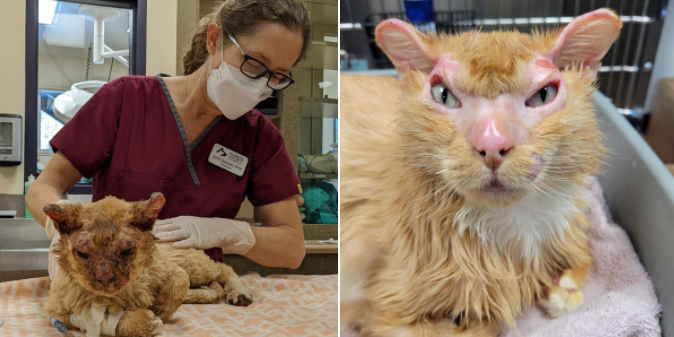