A woman has revealed how she spent $25,000 cloning her dead cat because she believed the pet was her soulmate.

Speaking to Alison Hammond and Dermot O’Leary on ITV’s This Morning, Kelly Anderson, 32, from Texas, said she was distraught when her five-year-old pet, Chai, died in 2017.

Kelly described Chai as ‘the closest thing she could describe to a soulmate’, adding:’ I lost her very young, so when she passed I remembered a conversation I had with my room mate about cloning and I reached out to ViaGen Pets. Belle came into my life just last year.’

As she held Chai’s clone Belle on her lap, she went on to describe how the process of cloning her animal took four years – but it was ‘definitely worth the wait.’ 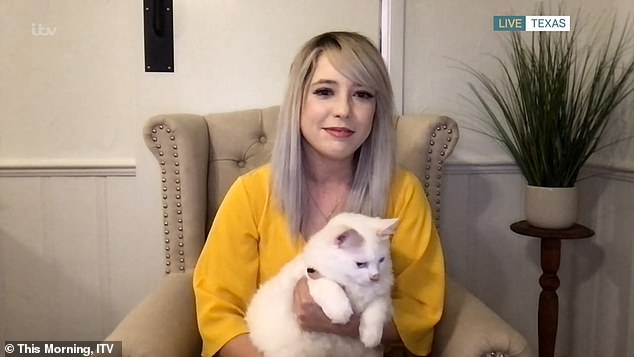 Kelly Anderson, from Texas, spent $25,000 cloning her dead cat Chai because she believed the pet was her soulmate (pictured, with Chai’s clone Belle)

Biologically her new cat Belle (left) is part of Chai (right), because they share the same DNA due to the cloning process

Biologically her new cat Belle is part of Chai, because they share the same DNA due to the cloning process.

ViaGen Pets, based in Texas, is a division of TransOva Genetics, that offers animal cloning services to pet owners.

ViaGen Pets has been cloning horses and livestock for 17 years, three and a half years ago they started cloning cats and dogs. 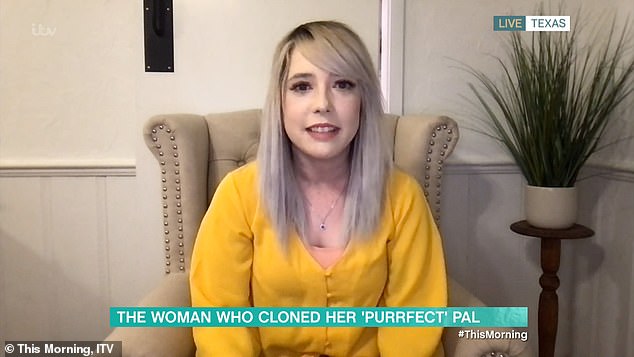 Kelly explained that the full process took nearly four years from start to finish, however she admitted that isn’t the ‘normal length of time’

The difference in price is due to dogs going into heat only once or twice a year while a cat’s reproductive cycle is much more frequent.

To clone a pet, ViaGen Pets requires at least two skin samples to collect the DNA.

Most skin samples are taken from the belly or the inside of a pet’s leg.

These samples are then chilled with ice packs and sent to a laboratory where they are placed in an incubator and cells start to grow.

Within two to four weeks, there are millions of cells.

HOW ARE CATS CLONED?

The process involves obtaining at least two skin samples from a living cat or a cat five days after it has died.

In the next step of cloning, a donor egg is taken from a donor animal.

Eggs are collected from the egg donor through a procedure called ‘flushing’ and the nuclei of the eggs, which contain DNA of the egg donor, is removed.

Then donor cell obtained from the skin sample is then injected into the nucleated egg and the two cells are ‘fused’ together.

This fusion procedure produces a cloned embryo that is transferred into a surrogate cat.

The whole process takes less than a day but comes with a hefty price tag.

Dogs can also be cloned, but its pricier because dogs go into heat only once or twice a year while a cat’s reproductive cycle is much more frequent.

The cells are harvested and placed in vials which are frozen in liquid nitrogen tanks.

This genetic preservation costs $1600 with an annual $150 fee for storage.

In the next step of cloning, a donor egg is taken from a donor animal.

The nucleus of the egg is removed so there is no DNA and it is replaced with one of the millions of cells that have been grown in the laboratory.

The embryo is implanted into a surrogate animal who gives birth to kittens genetically identical to the original cat.

Kelly explained that the full process took nearly four years from start to finish, however she admitted that isn’t the ‘normal length of time’.

Speaking about the process of cloning, the pet owner said: ‘They take a skin biopsy and they recommend to do it while your pet is still alive.’

However she did admit if you wait until after your pet has already passed away then you need to ‘do it quite quickly because the cells start dying off.’

When asked by Alison if Belle feels like the same cat, Kelly explained: ‘She’s her own cat’ and she ‘never expected her to be Chai.’

She continued: ‘I never wanted her to be Chai, to me that felt like a replacement.

‘It’s a piece of Chai so that’s what matters the most to me.’

She went onto say she also adopted two other cats but she wanted to clone Chai because she felt she ‘didn’t have that time with her’ after she died young.

Kelly received a lot of trolling online after deciding to clone her cat but the pet lover said people are mostly concerned about how she ‘spends her money.’

She explained:  ‘$25,000 is definitely a lot of money but people spend that on cars everyday or more and no one says anything about that.’

WHAT IS CLONING AND COULD WE ONE DAY CLONE HUMANS?

Cloning describes several different processes that can be used to produce genetically identical copies of a plant or animal.

In its most basic form, cloning works by taking an organism’s DNA and copying it to another place. 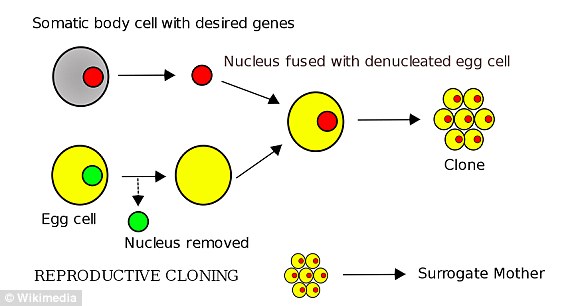 To create somatic cell nuclear transfer (SCNT) clones, scientists take DNA (red circle) from tissue and insert it into egg cells (yellow) with their DNA (green) removed. The scientists then switch on or off certain genes to help the cells replicate (right)

This takes a somatic cell, such as a skin cell, and moves its DNA to an egg cell with its nucleus removed.

iPSCs are skin or blood cells that have been reprogrammed back into an embryonic-like state.

This allows scientists to design them into any type of cell needed.

Could we ever clone a human?

Currently there is no scientific evidence that human embryos can be cloned.

In 1998, South Korean scientists claimed to have successfully cloned a human embryo, but said the experiment was interrupted when the clone was just a group of four cells.

In 2002, Clonaid, part of a religious group that believes humans were created by extraterrestrials, held a news conference to announce the birth of what it claimed to be the first cloned human, a girl named Eve.

This was widely dismissed as a publicity stunt.

In 2004, a group led by Woo-Suk Hwang of Seoul National University in South Korea published a paper in the journal Science in which it claimed to have created a cloned human embryo in a test tube.

According to the National Human Genome Research Institute, from a technical perspective cloning humans is extremley difficult.

‘One reason is that two proteins essential to cell division, known as spindle proteins, are located very close to the chromosomes in primate eggs,’ it writes.

‘Consequently, removal of the egg’s nucleus to make room for the donor nucleus also removes the spindle proteins, interfering with cell division.’

The group explains that in other mammals, such as cats, rabbits and mice, the two spindle proteins are spread throughout the egg.

Wed Apr 6 , 2022
RICHMOND, Va. (WRIC) — Governor Glenn Youngkin signed five pieces of legislation Monday to support animal welfare reform for dogs and cats that are bred and sold for experimental purposes. According to a press release from the Office of the Governor, these laws, dubbed “the Beagle Bills” work to ensure […] 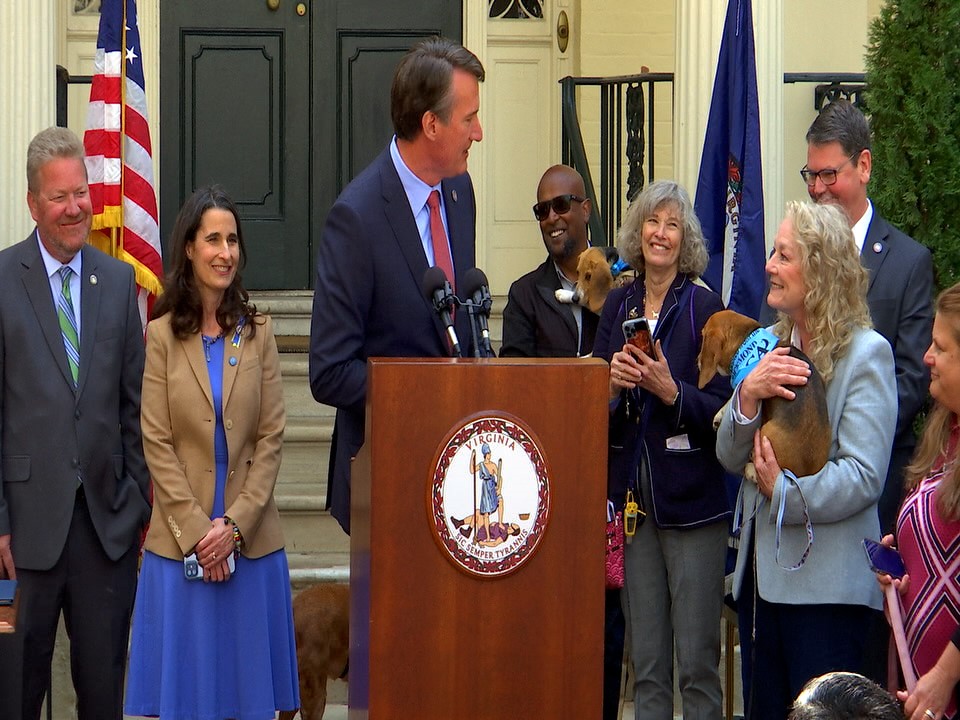