You and your dog no doubt have a special bond. But it’s deeper than all those scraps from the table or trips to the dog park. Something far in the shared evolutionary past of dogs and humans has linked the two species, making our canine companions especially good at understanding when we want to help or communicate with them. Point in the direction of wayward kibble on the kitchen floor, and your dog likely will follow your guidance to gobble it up. That is a skill that not even our closest relative in the animal kingdom can match.

“Chimpanzees can run circles around dogs on so many things,” says Brian Hare, who studies the evolution of cognition at Duke University. “But they’re not particularly good at understanding cooperative communicative gestures.” Hare and his colleagues are interested in the so-called domestication hypothesis: the idea that in dogs, the ability to comprehend human gestures is an evolved inherent trait rather than something learned by individual animals as they mature. Previous studies had shown conflicting results regarding whether both dog and wolf puppies are instinctively able to read human gestures. So Hare’s team put a group of young dogs against their wild cousins to test the question out.

The dog pups, all Labrador or golden retrievers or mixtures of the two breeds, were service-dogs-in-training, and the majority were raised by the nonprofit organization Canine Companions for Independence. Like any other young puppies, they engaged in sporadic human interaction throughout the day, and they were still under the tutelage of their canine mom. The young wolves, on the other hand, had been separated from their mother 10 or 11 days after they were born,  and they were around human handlers 24/7—someone even slept with them at night. Only a generation or two removed from wild wolves, they lived at the Wildlife Science Center, a sanctuary and research resource located in Stacy, Minn. The team tested the wolves’ genetic ancestry to make sure they were gray wolves and not wolf-dog hybrids, says Duke University researcher Hannah Salomons, the study’s first author.

The scientists put 44 dog and 37 wolf puppies, all between five and 18 weeks old, through a slate of tests and challenges. In one task, researchers placed a treat in one of two bowls, then pointed a finger at the bowl containing the snack three times. The dog puppies were twice as likely to understand where to go even though they had experienced far less human contact, results that held up when the researchers made sure the pups were not just smelling the morsel of food. And in a separate test, the dogs were 30 times more likely to approach an unknown human and made significantly more eye contact with people than the little wolves, the researchers report today in Current Biology.

The comparison of so many young dogs and wolves on a wide variety of tasks is “very exciting” says Angie Johnston, a canine researcher at Boston College, who was not involved with the new work. “It’s a very ambitious study,” she says. Johnston was also struck by the magnitude of the differences between the two types of pups, but she wonders if was in part linked to the dogs’ selection as service animals. They probably have been bred over many generations to be extra helpful and attuned to the needs of people, she says. “What is this like in dog puppies that aren’t bred to be service dogs?” Johnston asks. Salomons points out that previous studies comparing service dogs with household pets show their abilities do not diverge significantly. She is now testing pups from Canine Companions for Independence in a long-term study to see how individual dogs’ cognition develops over time.

Outside of the tests, Salomons notes that while young wolves and dogs are both adorable and do a lot of the same things (tumble around with their littermates, chew on foreign objects, test out their barks), their responses to humans could not be more different. “The wolf puppies are so shy” and can take hours to emerge and give a stranger a sniff, she says. But the Lab and golden retriever pups “want to climb all over you and lick your face.”

The cat Baloo disappeared after harrowing attack on his owner. Three years later, they found each other again.

Wed Jul 21 , 2021
The gray cat perched on a curb, a blur to the traffic tooling by on Southeast McLoughlin Boulevard in Oregon City. It was a perilous spot. The Rivershore Hotel loomed in the background. Behind that, the Willamette River. This was where the cat had lived since 2018, wandering the hotel […] 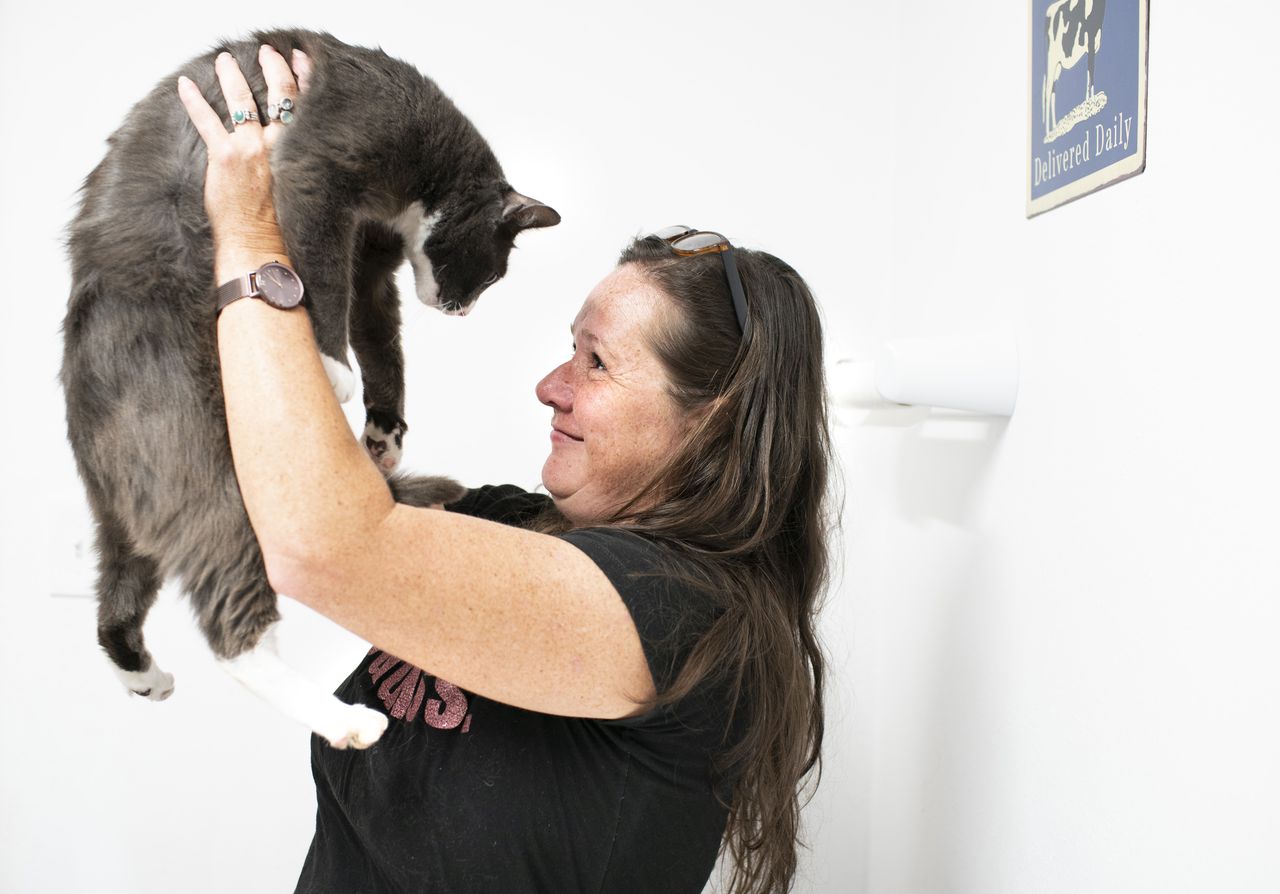