Cats, as the myth goes, have nine lives. But Fishtopher the cat was wasting his away.

The “very sad and depressed” 5-year-old feline, a New Jersey shelter said, was waiting for someone to adopt him.

The call-out that went viral — possibly thanks to Fishtopher’s decidedly unimpressed expression — has been answered: A Maryland couple drove to pick up the “big cheeky boy” at the shelter this weekend.

Social media users have avidly followed Fishtopher’s story since a Twitter post with a screenshot of the seemingly grumpy cat’s online adoption profile was posted on Thanksgiving Day, earning more than 169,000 likes.

The Homeward Bound Pet Adoption Center described the domestic shorthair and Bengal mix as a “sweet, easy-going, laid-back boy” but said Fishtopher was “out of sorts at the shelter.” He would eat only when he had company and appeared to be “missing his family.”

Fishtopher’s new family is chronicling his adventures online. The feline — who also goes by “fishy,” “mister fishster” and “bubby,” according to his new owners in a tweet — has more than 50,000 combined followers on Twitter and Instagram, with loyal fans who have dubbed him “silly cheek-man” and a “floofy stripy catboi.”

While the shelter said that Fishtopher’s “new-found fame” has led to other cats being adopted, his story has also highlighted the plight of animals in U.S. shelters. Thousands of these animals are euthanized every year when a home can’t be found for them.

Individual animals periodically go viral online, often because of their look or their story, but in “many areas of the country there are more pets than there are appropriate homes,” according to the American Society for the Prevention of Cruelty to Animals (ASPCA).

As evictions rise, people may have to give up their pets. Animal shelters are calling for help.

Fishtopher is one of the lucky ones. On Nov. 24, Twitter user Molly Clarke posted a screenshot of Fishtopher’s profile on Petfinder, a platform on which shelters can list animals up for adoption, along with a photo of the feline lying down and looking forlorn. “i swear to god. if one of you doesn’t go get fishtopher,” Clarke said, offering to cover the adoption fees for anyone who took him home.

“Fishtopher loves being pet, and is an affectionate boy,” the shelter wrote on his profile. “He wouldn’t even look up for pictures, but did enjoy his one on one attention, and getting chin rubs. Fishtopher is a big cheeky boy, wouldn’t you love rubbing up on those big cheeks? He loves cuddling up in arms, it seems to make him feel secure.”

Tanner Callahan, 24, applied to adopt Fishtopher after his partner, Laura Folts, 22, sent the link to the cat’s profile — though it wasn’t initially “a super serious thing,” Folts told The Washington Post on Twitter. “We had been talking of Tanner adopting a cat or dog since he moved into his new (bigger) place, and had a trend of me sending cute animals as a joke,” she added.

Callahan lives in Baltimore, and Folts outside of the city. The couple posted pictures of their journey home with Fishtopher on Twitter.

we’re still on our way home, took a pit stop to pick up kitty food and litter! (we got other supplies yesterday) he is very shy but once held he likes to hide his face into the crook of your arm pic.twitter.com/2uO6ekxO5g

The Homeward Bound Pet Adoption Center said on Saturday that it received “hundreds of inquiries from people who wanted to adopt” and that “people were waiting out front this morning in line” for Fishtopher.

The ASPCA estimates that 530,000 cats are euthanized in shelters across the United States each year, though there is no official national database that tracks these numbers. Animals with illnesses, including FIV, or disabilities can have a harder time finding a home.

Some Brits are abandoning their pets as cost of living skyrockets

In a Twitter thread about Fishtopher’s journey, people posted about other pets that needed adopting, including an Oregon cat named Miss Nellie and a New Jersey dog named Mac. In its post celebrating Fishtopher’s adoption, the Homeward Bound Pet Adoption Center said “hundreds of other kitties” were “wishing that people would come and stand in line for them.”

The executive director of Homeward Bound, Lysa Boston, told Insider, “We are thrilled with all the attention that he [Fishtopher] got and hope that it will make people realize that we have so many wonderful cats and dogs as well up for adoption that are so often overlooked.”

Keeping This Outside Will Attract Snakes to Your Yard, Experts Say

Tue Nov 29 , 2022
No one wants to come across a snake in their yard—especially since this means they’re just one quick slither away from entering your home. Just because snakes are ultimately useful for keeping other pests at bay doesn’t mean we’re eager for a close encounter. Nevertheless, most of us aren’t doing […] 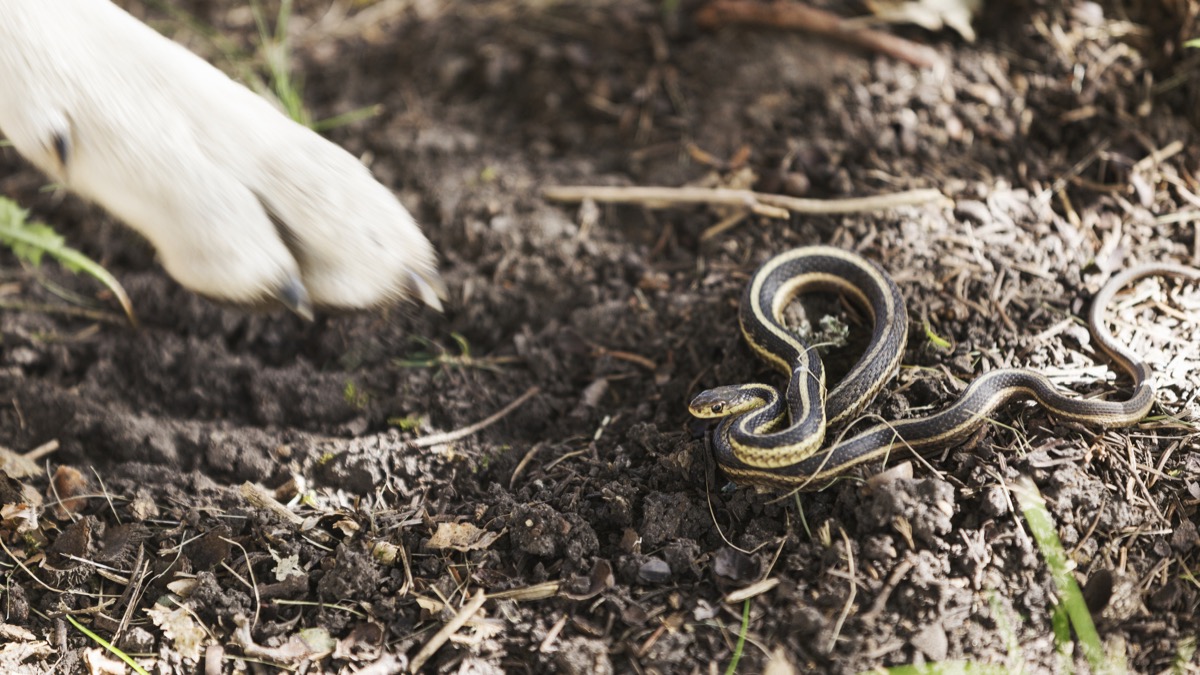