A man’s gotta eat and so does his family…

Unfortunately for us, our favorite furry critters can be easy targets for those birds that decide to make a home near an urban environment.

It’s notoriously rumored that many nests that belong to birds of prey are littered with many different collars from cats and smaller dogs. It’s no question that these birds are absolute killers… assassins of the sky.

Eagles in particular are crazy good at hunting. They have vison far better than humans and it’s said that what we can see at 5 feet away they see the same at 20 feet. They also see in UV meaning any trace an animal leaves is easily picked up and draws them in.

Yup, that means your yard covered in dog piss is a clear target these birds are keeping an eagle eye on.

The funny thing about this particular video is that it involves a housecat. Cats are known to cause more bird deaths in North America than any other cause by far. Seriously, they kill millions of birds a year.

So, if we think its cute when our pet lands on the front step, proud of his kill, it’s hard to be to upset when something comes after it, isn’t it?

I mean, I get it… they are pets… there is a difference. But we need be realistic about what goes on out in the wild.

These eagles here are shown with one parent and two chicks in a nest. It’s a common research tool and its often live-streamed to watch an eagle’s nest. Lots of cool stuff can be captured, just like this instance right here.

The mature eagle in the nest looks back and another flies in and lands in the nest.

At first its hard to tell what, but this eagle brought home dinner. After we get the slo-mo replay you can see that it has a house cat that is done for in the nest… all you can really make out is the head…

According to the author of the video, this eagle’s name is Harriet:

“Harriet flies in to the nest with roadkill cat (head and foot). She most likely picked it up from the side of the road after the cat had an unfortunate run in with a car and brought it to the nest as prey for the E’s.

Eagles are opportunistic hunters, nothing is wasted in nature. It may be difficult to see the cat head on the nest and some viewers may want to limit their watching until it is disposed of one way or another. Poor kitty…”

Keep you kitties close if you have any birds of prey around.

These airborne predators do not discriminate between animal species, domesticated or wild. All they care about is their next meal.

Sadly, our beloved pets, whether it be small dogs or cats, are generally insanely easy targets for them. The same way one of these flying dinosaurs will swoop down on a rabbits, prairie dogs, and even fish, eagles think nothing of digging their talons into Fluffy, the 2-pound rodent you keep in your purse (sorry, that’s not a dog).

There are many stories of this out there, whether its an owl getting a dog, finding leashes in a nest or in this case an eagle flying with a cat. Hell, in some parts of the world, golden eagles have been known to take a run at small children.

It happens… small pets just look tasty to them. That’s why you should be on guard when in an area with known predators. They are sneaky, they are fast, and by the time you see them, it’s too late.

This video shows how easy they can manhandle a common housecat.

A women is driving filming an eagle sitting in a park.

You know something is off about the situation because an eagle never just sits in a park like its relaxing. There has to be something else going on…

That something else is quickly revealed when the eagle starts flying away. As it takes off a house cat that was in a ball takes shape again so you can tell what the eagle is having for lunch.

It near ripped it into two pieces.

And at first glance you see the eagle, but you don’t really get a feel for its massive size until it flies away, flexing that massive wingspan.

I hate to say it, but I can’t help but feel like it’s a little bit of karma. Outdoor house cats are the biggest killer of song birds in North America and this ones time comes to an end from another bird… seems slightly fitting.

The video comes to us from a fella up in Two Harbors, Minnesota:

“My dog, Keisha and I were driving around taking pictures of wildlife when I saw this Eagle sitting on the ground. He was arguing with two black birds. I decided to take a picture of him. This would be the first picture of an Eagle that I take.

As I started driving closer to him he wasn’t moving. So I decided to take a video of him. I thought him taking off in flight would make a great video. I was shocked. Did not see that coming.

My dog and I just sat there like, what did we just see?”

Bald Eagles Have Killed Over 50 Lambs In Idaho

Last spring, 54 of his lambs have been poached by the birds, including 7 in one day, which were all reportedly killed by one eagle.

“I truly think he was just honing his skills because you don’t kill seven of them out of need.”

Initially, Matthews was unsure of what exactly was killing all of his lambs until he saw a bald eagle attack his flock from the sky. For a moment, he even thought someone was shooting them with pellet guns.

The eagles have been nesting on his ranch for more than 20 years without incident, but that all changed this year.

“They’ve never crossed paths till this year. The damage under the hide is a hundredfold from what you see on the exterior.”

He estimates the loses on those lambs have cost him roughly $7,500. He also hypothesizes the the eagles were drawn to his sheep because colder then usual water temperatures in the lake this time of year could have made fishing more challenging for the birds.

Mr. Matthews has since relocated his flock of sheep further away from the eagles and to an area with more barn cover. Meanwhile, Idaho Fish and Game has directed him to the Department of Agriculture’s Wildlife Services program to explore potential solutions.

Since shooting the birds is not an option as with other livestock menacing predators, moving them was his only option. Eagles are federally protected, and those caught poaching them are potentially subject to up to a year in prison and a $100,000 fine.

Hopefully the new location works out for the better, because the current rate of predation is not sustainable for a ranching operation.

The neighboring state of Wyoming recently approved a plan to relocate a number of golden eagles with a similar habit of preying on sheep, but there is no indication that option is being explored in this instance.

Mon Sep 19 , 2022
NEWYou can now listen to Fox News articles! The second of three puppies stolen from an animal shelter in Atlanta, Georgia, in a recent break-in was found safe on Sunday. Three dogs were taken from PAWS Atlanta in DeKalb County during an early morning break-in on Friday — two puppies […] 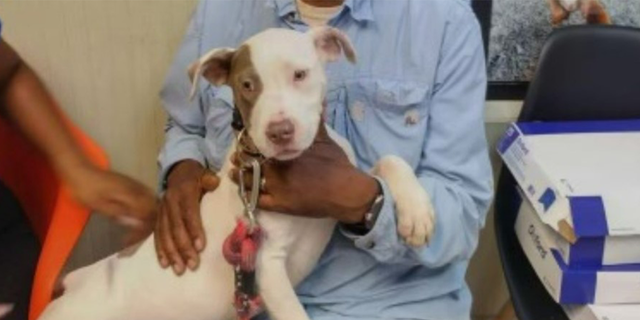