A California man is facing charges after surveillance footage showed him taking a dog out of a parked car last week.

In a Facebook post, the Irvine Police Department said a small dog by the name of “Mookie” was stolen out of a car in the University Town Center parking lot on Friday, Sept. 16.

Detectives located surveillance video that showed a man walk up to the car on its rear passenger side, seemingly talk to the dog and then take the dog through an open window within 40 seconds.

The man in the video was later identified as 38-year-old Earl Choi, of Fullerton, California.

Police said Mookie’s owner posted about the incident on a pet recovery website.

A man is seen reaching into a parked car at a California shopping center to take a dog. Irvine police later identified him as 38-year-old Earl Choi, of Fullerton.
(Irvine Police Department/Facebook)

Choi then made contact with the owner and reportedly said his roommate came home with a dog matching Mookie’s description, and he would return him for a small fee.

The owner agreed to meet with Choi to pick up the dog.

DOGS CRY TEARS OF JOY WHEN REUNITED WITH THEIR OWNERS: NEW STUDY

A man later identified as 38-year-old Earl Choi is seen taking a dog from a car parked at a shopping center in Irvine, Calif.
(Irvine Police Department/Facebook)

Once Choi arrived at the location with Mookie, officers arrested him and charged him with grand theft.

Irvine police said a happy Mookie was safely returned to his family.

Adorable buff tabby cat in need of adoption in Utah: ‘Such a sweet girl’

Sun Sep 25 , 2022
NEWYou can now listen to Fox News articles! One seriously cute kitty is in need of a new family. Annie, a female buff tabby cat, is currently up for adoption at Best Friends Animal Society in Utah. The three-year-old cat was taken to Falls Humane Society in Idaho in May […] 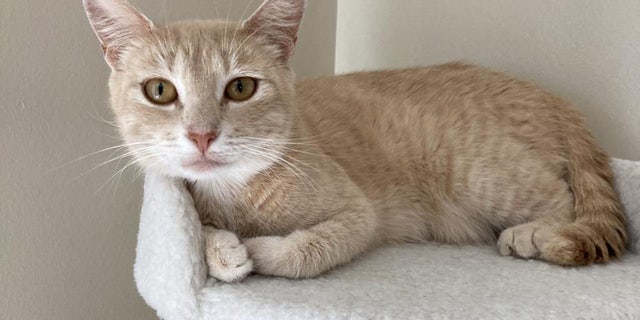