KITTERY, Maine — Furry friends of Kittery and Eliot residents in need of chow, kibble and other pet care items have a spot their owners can go when food is running low.

Benefitting cats and dogs and their families in the Kittery and Eliot area, Phinn’s Pet Food Pantry is the newest addition to Footprints Food Pantry as part of a partnership with Foreside business Maine Meat.

The pet food pantry, a modified version of services already offered at Footprints, is a tribute to Phinnaeus Bacon, the late rescue dog owned by Maine Meat co-owners and partners Shannon Hill and Jarrod Spangler.

In October 2018, Phinn, a rescue dog, was sedated for a procedure to remove a small cancerous growth on his eyelid. Following the procedure, he suffered a heart attack during his recovery and was unable to be revived.

Hill remembered the collective grief felt by Foreside regulars following Phinn’s death, noting that the former commander of the Portsmouth Naval Shipyard even sent a handwritten note to her and Spangler expressing his condolences for the loss of the “Mayor of the Foreside.”

“He belonged to the community,” Hill said of her old pooch. “Customers who were having a rough day would come by and ask to take him for a beach walk, a forest run, or for an afternoon neighborhood walk in order to clear their minds. He touched the hearts and souls of everyone he met and was the perfect example of why rescuing is so important.”

Footprints Food Pantry executive director Megan Shapiro-Ross said that due to ballooning prices, the pantry is seeing an increase in requests for pet food and other pet care supplies.

Sam the seal:‘semi-critical’ after being rescued along Swasey Parkway in Exeter

Food costs have increased by 11.4% over the past year, per data released by the U.S. Bureau of Labor Statistics in mid-September. The jump in grocery bills was the highest annual increase since May 1979.

“This massive increase is not only putting many households into a new, never-before needed situation of visiting a food pantry, but it has also impacted the ability of many households to adequately care for their pets,” Shapiro-Ross said.

Since 2019, Maine Meat, which was founded in 2014, has raised over $20,000 in support of local animal organizations for its annual giving campaign called “For the Love of Phinn.”

“The first anniversary of Phinn’s passing had me just as distraught and upset as the day he suddenly passed away,” Hill said. “I couldn’t imagine reliving that horrible day over and over again. I wanted to do something to honor him and the love that our community had for him.”

Pet food was already offered at Footprints and donations were always sought to maintain its supply. Shapiro-Ross said that Hill approached her about donating Maine Meat’s annual fundraising to Footprints to bolster its pet food supply now and into the future, an idea that snowballed into Phinn’s Pet Food Pantry.

‘The dog did his job’:York police dog recovering after stabbing during standoff

This year’s check cut by Maine Meat for Footprints to kick off the revamped pet food pantry totaled more than $6,000 after the business ran an online giving campaign in the last half of October.

“If we can help to keep pets in their homes by alleviating the financial burden of pet food, then Phinn’s legacy and his impact on his community lives on,” Hill said. “That’s what this is all about.”

The pet food pantry will be open during regular shopping days at Footprints Food Pantry, with Shapiro-Ross noting current hours are Tuesday evenings from 5:30 to 6:30 p.m. and on Wednesdays from 9:30 a.m. to 12:30 p.m.

Thu Dec 29 , 2022
President Biden doesn’t speak about sensitive matters in front of the Secret Service and told a friend that he thought an agent lied about being bitten on the leg last year by then-first dog Major, according to a new book — despite internal emails indicating the German shepherd bit agents […] 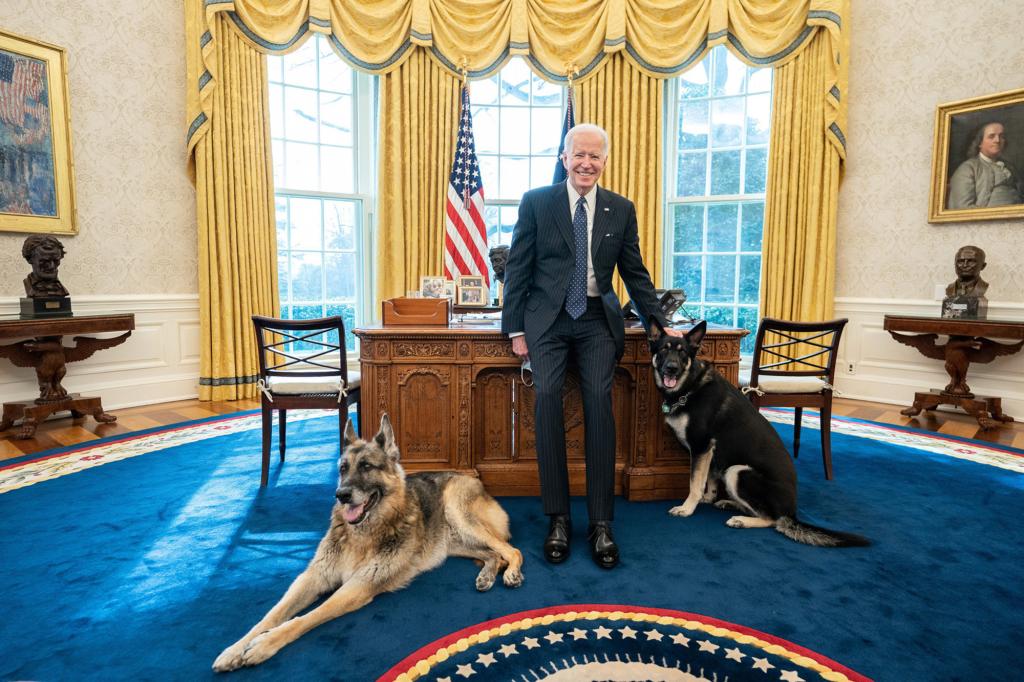