Could a shelter dog with a chronic illness find a home before the holidays?

The animal shelter staff did not believe in giving up, so they told the dog it was time, once again, to show off all that she had to offer: Her chunks of missing fur. Her constant peeing. Her potbelly, grown so protuberant that it nearly grazed the ground everywhere she waddled.

“Come on, Princess Fiona,” they said, as they heaved her wide bottom – complete with a tail everyone agreed belonged on a rat – into the car for another adoption event.

The pandemic puppy craze that overwhelmed shelters across the country is very much over. In its place, a ruff economy. More and more furry friends being given up. Washington’s Humane Rescue Alliance is quite literally overflowing with animals, with many dogs living in crates because every kennel is full. For much of December, the shelter waived adoption fees for large dogs, hoping that at least some of its marooned mutts would find homes before the holidays.

Maybe they could even find someone to take in one of the shelter’s longest lingering residents: Princess Fiona, a 7-year-old, 48-pound pit bull mix with a stress-induced syndrome called hyperadrenocorticism, or Cushing’s disease. Her hair loss, constant thirst, frequent potty breaks and beer-belly-chic physique are all a result of the production of too much cortisol, the hormone best known for the “fight or flight” response.

Princess Fiona, her caregivers reported, was not one for fighting, flighting or any activity that does not involve being lured with snacks. In her nearly four months at the shelter, she had been regularly referred to as a “potato,” a “land hippo,” and a “little ogre.”

But unlike the Princess Fiona in the movie “Shrek,” whose monster form becomes permanent, veterinarians believed that the condition of this Princess Fiona was likely to improve – if only she could find a less stressful environment to live in.

And so she arrived at a Northeast Washington strip mall on the first Saturday of December, along with four other destitute dogs and a truck full of cast-aside cats. People hustled past them as they hurried about their holiday shopping, heads down against the day’s whipping winds.

Princess Fiona’s handler, volunteer Alesha Bryant, knew it was not an ideal day for an outdoor adoption event. But Bryant said that wasn’t why Princess Fiona looked so concerned. Beneath her floppy ears, her forehead wrinkles never went away.

Like many, Princess Fiona appeared to be perpetually worried about the state of the world.

Bryant took her inside PetSmart to warm up. Princess Fiona walked up to the Rudolph chew toys and immediately started peeing. Her disease made her so thirsty that in the shelter, she drank out of two large buckets. And even for a princess, that water had to go somewhere. She pulled Bryant to the kibble aisle and left a puddle there, too.

As another volunteer unloaded wads of paper towels, Princess Fiona permitted the staff to bedeck her in a brightly colored Christmas sweater. Her ballooning belly — caused by weakened abdominal muscles and an enlarged liver — made it a crop top.

Another man hustled past without sparing the dogs a glance.

“Okay,” Bryant sighed to Fiona. “You can have some more water.”

This was not the princess’s first trip through the shelter. Her original owner brought her to the Humane Rescue Alliance in January, knowing there was something going on with her but unable to care for her any longer. She was quickly adopted, with the recommendation that her new owners put her on Vetoryl, a medication that could lessen her symptoms. But that medication is expensive, at $50 to $100 a month. By August, Princess Fiona was back at the shelter.

Veterinarian Emily MacArthur knew right away that her condition had worsened.

Cushing’s, which can also strike humans, is named after “father of neurosurgery” Harvey Cushing, who made his discoveries, in part, by experimenting on the brains of dogs in the early 1900s. Cushing would surgically remove pups’ pituitary glands and then watch them grow fat.

Princess Fiona, by all accounts, received far better treatment at the Humane Rescue Alliance. The longer she stayed — far past the three-week average for dogs — the more volunteer and staff admirers she acquired. She became particularly beloved for her ability to “sploot,” a Dictionary.com-approved word for when an animal flops onto its belly with its hind legs splayed behind it.

A Chevy Chase dog park divides the rich and powerful

It was that leisurely lounge that made Monica Whitaker, on her way into PetSmart with her daughter to look at adoptable cats, stop outside the store.

“Is she pregnant?” Whitaker asked.

The staff explained to her about Cushing’s disease, about Fiona’s long stay, about the medical care she would need.

Whitaker called over to her 16-year-old son, who was sitting on a bench ignoring her. He shook his head, uninterested.

His little sister, 5-year-old Myanni, then shook her head at her brother. “Teenagers are too much,” Myanni said.

She rubbed Princess Fiona’s forehead wrinkles. A volunteer handed her a cheese stick to tear up into smaller pieces, explaining how much this doggy liked snacks.

Myanni said she, too, liked snacks. She handed Fiona the entire cheese stick.

Then the kindergartner turned to the volunteer with a question.

“Do you take Cash App or card?”

Whitaker began to tear up. She was looking at Princess Fiona, and thinking about her 19-year-old son. About the bicycle crash he’d had as a 6-year-old that ended in a head injury. About explaining to people that yes, he’d been left with intellectual disabilities and a speech impediment. About all the times she’d had to fight for him to be treated just like the other kids. Just because someone has medical challenges, she’d told him again and again, doesn’t mean they don’t deserve the life they want.

They would not be getting a cat after all.

“You’re going to sleep in my bed,” Whitaker said to Princess Fiona.

The next morning, Whitaker walked into Humane Rescue Alliance to find the princess still in her Christmas sweater, surrounded by staff members saying emotional goodbyes. It was her 119th day at the shelter.

“I thought I was going to have to take you home with me for Christmas so you wouldn’t be alone,” said MacArthur, the veterinarian, as she kissed Princess Fiona’s snout. “I never want to see you again.”

The staff handed Whitaker a month’s worth of medication, a sling to help Fiona scoot up stairs and a bundle of cheese sticks.

Whitaker’s oldest son was waiting in the car. At home, he would be the first one to take Princess Fiona out every morning. He would ignore his mother’s orders not to put Princess Fiona on the couch. He would wrap Princess Fiona in his sister’s unicorn blanket. And within days, Whitaker would swear that Princess Fiona’s belly was already becoming less bloated.

As she took the leash from the shelter staff, everyone began to clap.

The staff knew that later that day, another pit bull mix with Cushing’s disease was going to be returned to the shelter. It didn’t work out with her new owners. They would need to find another home for Pooh Bear.

But for now, they were watching Princess Fiona’s rat tail as she headed for the door.

She waddled into the sunlight. Then she started peeing.

This story previously misidentified the hormone that is overproduced in dogs that have Cushing’s disease. It is cortisol.

Cat Missing for 10 Years to Be Reunited with Owners

Tue Dec 20 , 2022
A cat named Mimi who went missing on Long Island 10 years ago has finally found her way home. Mimi’s owner Richard Price — who recently retired to Spain — said he got a shocking call from the Brookhaven Animal Shelter last week that staff had found his long-lost companion, […] 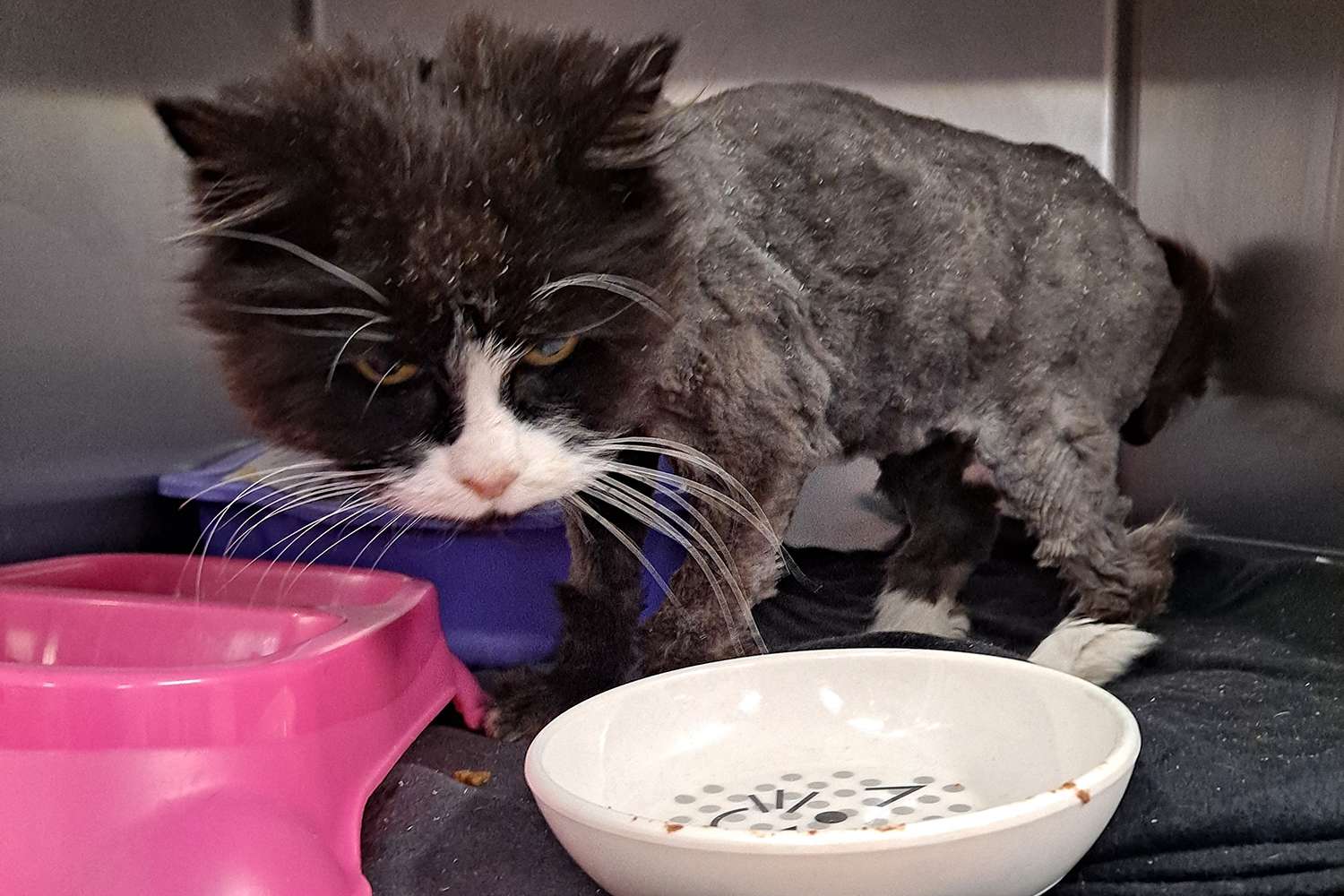