On Thanksgiving morning, our dog, Sherlock, ate his usual breakfast and went for his usual walk, on which he performed his usual bodily functions before returning to his usual spot on his (that is, our) bed.

“Something’s wrong with Sherlock,” my son announced an hour later, after which the dog bolted into the room and began to jerk uncontrollably. We tried to calm him down, but he was twitching violently and was plainly terrified. Briefly, I persuaded myself that he was experiencing some comical form of hiccups, but even I, with my considerable aptitude for self-delusion, had to give that up as he shook and flinched. Finally, my husband and I bowed to the inevitable. We had to get Sherlock to a veterinary emergency room.

As we made our way to the Schwarzman Animal Medical Center in Manhattan, I tried to prepare myself. Whatever this was, it wasn’t going to be benign. My money was on something neurological, but what came on like this, out of the blue? A brain tumor? A stroke? (Do dogs even have strokes?) Could it be something crazily exotic, like kuru? (I once read a book about it, a prion disease from Papua New Guinea acquired from the ritualized consumption of dead relatives’ brains.) Years ago, I had a sweet dog named Angus that began frantically turning circles one morning and by the end of that day was in terminal organ failure. As we drove through Central Park, I was bracing for something along those lines.

Here’s the diagnosis I wasn’t expecting, which Sherlock received on arrival in the E.R.: acute cannabis intoxication from something — likely the butt of a joint — he had gobbled up off the street.

In the past couple of months, two dispensaries opened on my block on the Upper West Side, and that’s in addition to the mobile store that appeared last year. All three seem to be thriving — not a surprise in a neighborhood with plenty of college students and left-leaning voters (a constituency to which I belong). I never thought twice about any of it until my dog nearly died.

According to Dr. Carly Fox, a senior veterinarian at Schwarzman, marijuana toxicity is now a common presentation in veterinary emergency rooms. Severity depends on the amount ingested and the size, age and health of the animal, and most dogs present with uncoordinated gait, dribbling urine, an exaggerated reaction to normal stimuli — that would be the flinching and trembling — bradycardia (low heart rate) and mild hypothermia. (You can see a few choice examples here.) Severe cases progress to respiratory depression, seizures and occasionally death.

On the plus side, most vets have now seen enough cannabis poisoning to know what it looks like. The Animal Poison Control Center reported an increase of 765 percent in calls about pets ingesting marijuana from 2008 to 2018, well before the mobile dispensary arrived on my block, let alone the two brick-and-mortar locations. From 2020 to 2021, there was a 60 percent jump in possible marijuana toxicity in pets. As in Sherlock’s case, it’s common for animals to exhibit clinical signs soon (one to two hours) after a walk outside, though it can take up to four hours in some cases.

Anyone who’s ever walked a dog on a New York sidewalk knows that to a canine, the pavement is a veritable smorgasbord, its delights ranging from the merely olfactory to various comestibles attractive to human taste buds and … not. In short, walking your dog in this city is like asking any of us to run amok in Jean-Georges Vongerichten’s new Tin Building food emporium, only it’s full of signs screaming: Help yourself! It’s all free!

Even if it took about a nanosecond for the emergency room vets to identify what was wrong with Sherlock, most dog owners are as ignorant as I was about this particular danger underfoot. To them I say, the sidewalks of New York are now a dispensary all their own, so if your dog suddenly starts to shudder and shake, it might be a good idea to think: “Maybe he ate the end of a joint off the pavement,” before, as I did, “Maybe he ate a kuru-afflicted brain from Papua New Guinea.” And don’t wait to figure it out on your own. According to Dr. Fox, it’s a good idea for any animal with Sherlock’s symptoms to get to the nearest veterinary emergency room.

Here’s another good idea: Maybe people could use a little more care when smoking pot outdoors. Or let me put that a different way: Maybe people could please pick up their damn roaches off the sidewalk and throw them in the nearest garbage can instead of leaving them underfoot. Hey, we’re living in a divided nation, and there’s so much we can’t agree about. But dogs? Everybody loves dogs. Republicans love dogs. Democrats love dogs. Even Kyrsten Sinema loves dogs. So let’s not, you know, poison them.

Alas, poor Sherlock. He has recovered fully, but a new era has begun in which he is obliged to wear a mesh muzzle every time he goes out for a walk. He doesn’t like that one bit, but a little humiliation (for him) and inconvenience (for me) are far preferable to another night in the I.C.U. (for him), not to mention the bill (for me.)

Jean Hanff Korelitz is the author of the novels “The Latecomer” and “The Plot.”

The Times is committed to publishing a diversity of letters to the editor. We’d like to hear what you think about this or any of our articles. Here are some tips. And here’s our email: [email protected].

'It can be fatal': Cat loses leg while seeking shelter from the cold in car engine

Fri Dec 23 , 2022
Cannonsville Critters says stray cats often climb under the hoods of cars to stay warm during winter weather. STANTON, Mich. — A cat rescue shelter is reminding people to check under the hood before starting your car in the cold. You may have an extra passenger that could be severely […] 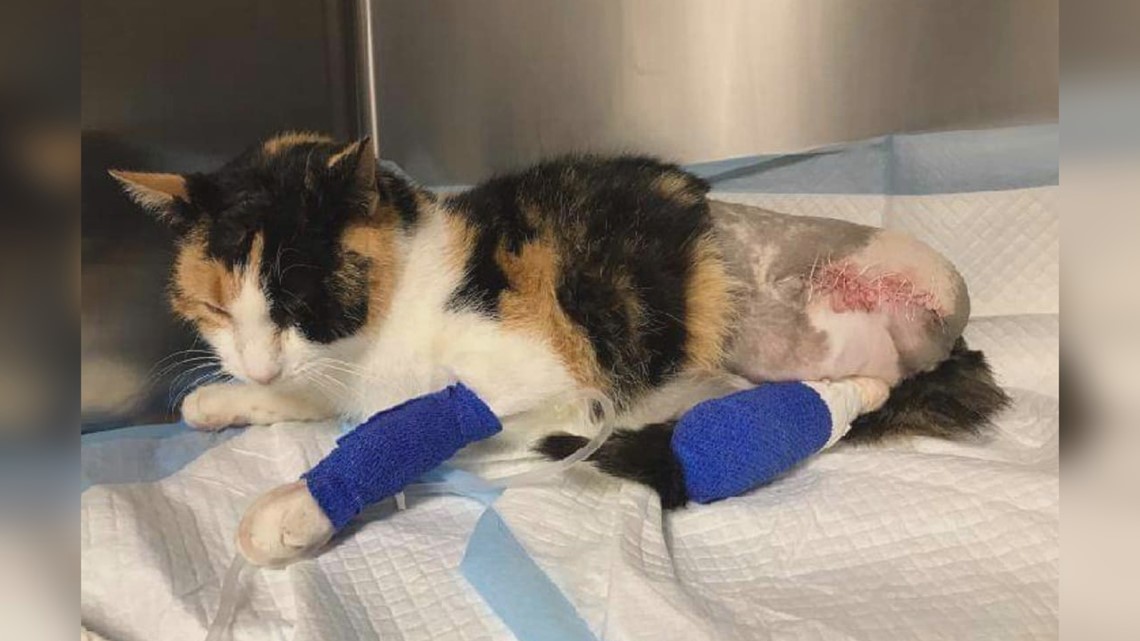