Alexandra Horowitz has been studying the inner lives of humanity’s best friend for about two decades, including in her current role as head of the Dog Cognition Lab at Barnard College in New York. Since 2009, Horowitz has also been a book author, translating the latest findings from the field of canine science for the general public.

In her book The Year of the Puppy, out on September 20, Horowitz dives deep into the earliest stages of being a dog. But this book comes with an added personal angle: It details Horowitz and her family’s journey in raising their own puppy, Quiddity, from the very start of life. Among other things, Horowitz discusses why new dog moms are always licking their puppies; why puppies aren’t too fussy about the nipples they nurse on; and how everything from a mom’s diet to the placement of a fetus within the uterus can subtly affect a dog’s later development.

I spoke with Horowitz about the emerging field of dog cognition and about her experience as a puppy parent. The following conversation has been lightly edited and condensed for clarity.

Ed Cara, Gizmodo: Many people love dogs, but few ever decide to pursue a career studying the minds of our canine companions. Was this something you were interested in early on?

Horowitz: More and more folks are now studying dog cognition, but you’re right, it’s not an obvious career choice. It is, though, now an honest-to-goodness field within animal behavior and cognition.

G/O Media may get a commission

Designer frames and contact lenses!
Perhaps you’re a stylish person who uses eyeglasses as an accessory sometimes, but prefers contact lenses other times—these double-threat deals are specifically for you.

I was always interested in dogs—in just the way that many people who grow up with dogs are. I loved them, wondered about them, wanted the best for them. But I didn’t want to be a vet, and it didn’t occur to me to study them. It wasn’t until I was in graduate school, studying cognitive science, that I came to dogs. Even then, my interest was in how we can find out about non-human animal minds generally—not dogs. I wound up studying dog play behavior, something I never could have anticipated and still can’t completely believe I get to do.

Gizmodo: You’ve studied and written about a variety of dog-related topics over the years. Why puppies this time?

Horowitz: I’ve lived with many dogs, but I’ve never known a dog from the time of her birth. Every dog adopter wonders about those early weeks and months of their dog’s life: about what happened to them to make them the dog they are. In this case, I thought I could talk about the research into the early development of puppies while also raising a puppy. Bonus: we got to adopt a puppy.

Gizmodo: What do you think might be some of the more surprising aspects of puppyhood for readers to learn about from your book? And were there any surprises for you in raising Quiddity through her first year of life?

Horowitz: Most dog people overlook the considerable period of adolescence in their pups—they assume they go right from “puppy” to “grown.” But they are teenagers for a long time, with teenaged behavior to match. The key to getting through this, for me, was simply the realization that it’s just a phase. This let me help her through it.

One surprise of my own was how little her early life predicted who she would become. I met Quiddity right after she was born, watched her with her mom and littermates, and observed her continuously through her first year. Sure, there were some early environmental exposures which might explain how she behaved later. For instance, she grew up around a lot of barking, and she also has a pretty formidable bark. Also, she met lots of people, cats, birds, and other animals as a youngster, and betrays no fear or anxiety about new people or animals now. But for the most part, I couldn’t have predicted the dog we know now from the furry sweet potato I met in her infancy.

Gizmodo: This book is about shining a light on a less-discussed area of dog cognition, at least for the general public. Do you feel that there are areas in the field that scientists such as yourself could be doing more to study and better understand?

Horowitz: Because the field of dog cognition is so new, much of the emphasis has been on dogs’ abilities in general—less on individuals. I think that the particular life histories of individual dogs is starting to be of more interest to researchers, and rightly so. There is no “average dog” any more than there is an “average human.”

Early dog development has been under-studied, too: It’s over so quickly! There is an increasing amount of work looking at how early exposures can lead to better performance of working dogs. It’d be great if that were the case for companion dogs, too.

Gizmodo: What comes next for your research? And how is Quiddity doing these days?

Horowitz: Quid is now a full-blown adult, two and a half years old. Thank you for asking about her. She’s mellowed quite a bit, while still having some puppy-reminiscent enthusiasms. She’s become herself, to be sure.

In my research, I’m still pursuing how dogs perceive the world through their noses, by devising olfactory experiments for them. And of course I’m watching Quid nonstop, and will surely draw inspiration from her sniffing of the world.

How Far Can a Cat Fall and Survive? The Limit May Not Exist.

Wed Sep 14 , 2022
In October of 1894, at a meeting of the French Academy of Sciences, the renowned physiologist Étienne-Jules Marey showed a series of photographs that sent his colleagues into collective uproar. In the flurry of accounts that followed, one conference attendee proclaimed that Marey had presented a scientific paradox that violated […] 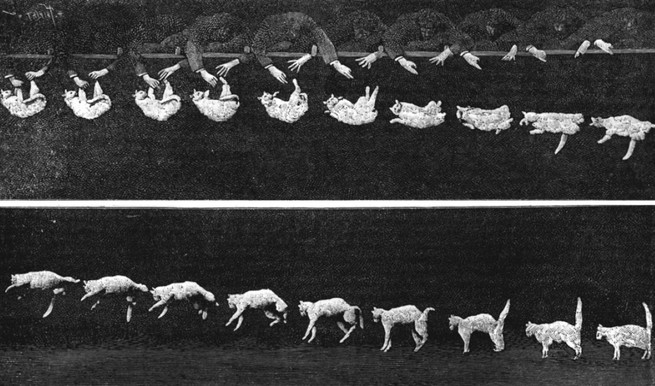