KSNF/KODE — If you have a pet, you’re likely to include them in your holiday celebrations, but this time of the year can quickly turn into a “not-so-merry” one for animals. A recent survey of over 1,000 U.S. pet owners found that a large number of Americans not only give their pets Christmas presents, but additionally prepare them holiday meals and include them in holiday activities such as scenic drives to enjoy neighborhood light displays.

However, not all holiday treats and traditions are safe for pets. An analysis of Google Trends data for the past five years shows that Google searches for ‘ER vet’ typically see a peak in the U.S. during the week of Thanksgiving as well as the last two weeks of December.

The Special Reports Team at Veterinarians.org, a pet parent resource and data information website, analyzed data from Google Trends for the search term ‘ER vet.’ The team focused on data specifically for the period of time beginning on December 15th, 2020 and ending on January 2nd, 2021. Based on an analysis of five years’ worth of data, this time frame traditionally shows peaks in U.S. searches for the specified search term.

Google searches for an emergency vet traditionally see an increase from the middle of December onward to the end of the month and through New Year’s Day. As families decorate their homes for the holiday season and prepare meals for special gatherings, companion animals are exposed to more dangers than usual.

Below are some of the most common holiday pet hazards families should be aware of:

Christmas trees often attract the attention of dogs and cats alike. However, if a tree is not securely anchored, it can potentially fall onto and injure an animal. Tree water also poses a danger, as bacteria is known to grow and thrive in sitting water, which may cause gastrointestinal upset in an animal if ingested, as can any added Christmas tree fertilizer.

After securing a Christmas tree, pet owners should block the tree off with a playpen, baby gate, or other barrier to keep pets safe while additionally covering the tree stand with aluminum foil to discourage pets from drinking from it.

Mistletoe, Holly, and Other Seasonal Plants

The ASPCA receives over a quarter of a million cases of potential animal poisonings per year. Plants are the eighth-most reported pet toxin and account for 40% of all calls. Seasonal plants such as mistletoe, holly, lilies, azaleas, evergreens, and poinsettias are all toxic to animals. Ingestion of such plants can cause nausea, vomiting, diarrhea, and in some cases, even cardiovascular issues. Cats in particular are especially vulnerable to lilies, which can cause kidney failure if ingested.

Ethylene glycol, an ingredient commonly found in anti-freeze, is deadly to animals. Pet owners should opt for a brand that omits this ingredient and labels itself as ‘non-toxic.’

As for rock salt, this commonly used ice melt is an irritant to paw pads. If an animal licks irritated paws as a result of walking on rock salt, ingesting the chemical can cause vomiting. Ice melts with a propylene glycol base are a safer alternative for households with animals.

Electrical cords, such as those attached to wired holiday lights, can be an especially dangerous hazard to animals. If chewed on, such cords may result in an electric shock that can be potentially lethal to a pet.

Pet owners should always hang tree lights on high branches while also protecting electrical cords with cord covers or double-sided tape and additionally keeping cords out of sight where possible. Pet owners should also keep batteries out of a pet’s reach, both those that operate holiday décor and those included in new Christmas gifts. Batteries may contain zinc, which can cause pancreatitis in an animal if ingested.

Ornaments are another danger to pets. Shards of broken ornaments can cut a pet’s mouth and tear into the animal’s digestive tract. Pet owners should always hang breakable ornaments out of a pet’s reach or opt for pet-safe, non-toxic, and non-edible ornaments to decorate the Christmas tree.

Cats are especially drawn to tinsel and other types of ribbons, but if ingested, these items can cause an obstruction in a cat‘s digestive tract, which can lead to vomiting and severe dehydration. In many cases, surgery may be the only means of removing the obstruction.

While it may seem harmless to share human food with a pet, foods are one of many pet toxins popularly reported to the ASPCA, making up more than 20% of all poison-related calls.

Chocolate and other foods containing xylitol (baked goods, peanut butter, candy, and pudding among them) are dangerous to pets. Even small amounts of xylitol can cause liver failure and even death in dogs and cats.

Additionally, hard candy like candy canes, are a choking hazard to animals, as are turkey and chicken bones. If such bones splinter when ingested, they may also cause tears in an animal’s digestive tract.

Raw dough also poses a risk. If ingested, raw dough can expand inside an animal’s digestive tract and cause severe bloating, making it difficult for an animal to breathe. If the raw dough contains yeast, this may also cause a pet’s blood alcohol level to rise, which may lead to alcohol poisoning. Alcohol intoxication in animals can result in vomiting, disorientation, and seizures. If left untreated, it can ultimately lead to organ failure. As little as just a few ounces of alcohol can result in a pet’s death in just 12-24 hours. In addition to alcoholic beverages, alcohol can also be found in some syrups, eggnog, and holiday breads.

Many pet owners may remain unaware of the potential holiday-related hazards in their household which pose a risk to the health and wellbeing of their pets. Given the increase in Google searches for emergency veterinarians during the holiday season, the issue is one that requires increased awareness. With proper education, families can keep their companion animals safe while still including them in holiday traditions.

Mon Dec 26 , 2022
Pet stores in New York State will soon be prohibited from selling dogs, cats and rabbits under a legislative ban meant to stem the sale of animals from breeding facilities that animal rights groups say subject pets to inhumane conditions. The legislation signed by Gov. Kathy Hochul on Thursday means […] 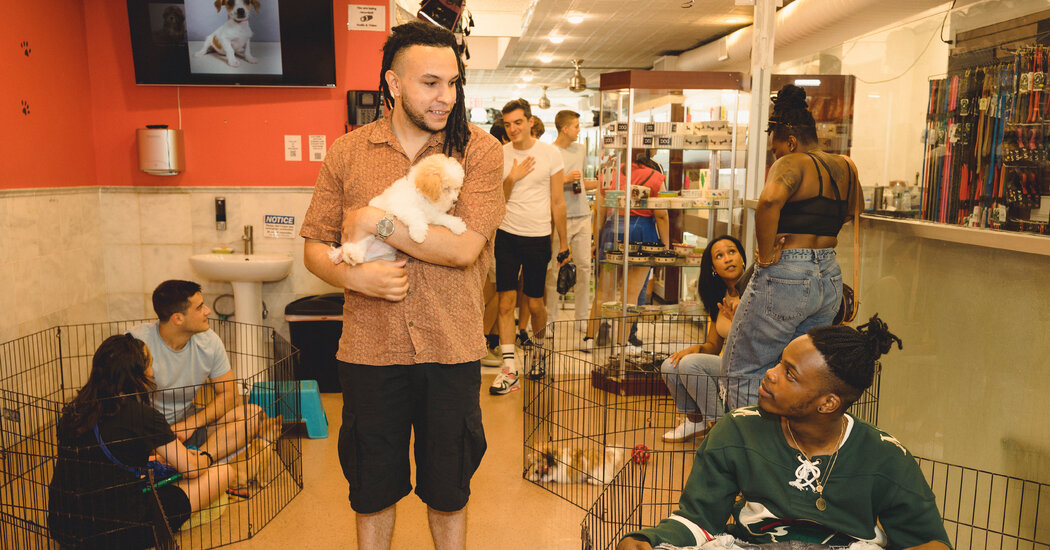